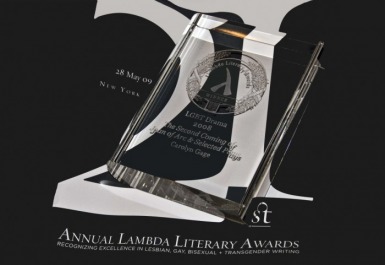 Photo by Helen E. Walsh
Carolyn Gage is a neurodivergent playwright, performer, director, and activist. The author of nine collections of lesbian- and feminist-themed plays and seventy-five plays, musicals, and one-woman shows, she specializes in non-traditional roles for women, especially those reclaiming famous lesbians whose stories have been distorted or erased from history.

For twenty-two years, Gage toured in the US, Canada, and in Europe in her award-winning, one-woman play, The Second Coming of Joan of Arc, offering performances, workshops, and lectures on lesbian theatre. From 2003 to 2016, she ran a production company, Cauldron & Labrys in Portland, Maine, where she workshopped and produced her own plays, frequently sending them to regional or national bookings.

In 2014, Gage was one of six featured playwrights at the 53rd Annual World Theatre Day, sponsored by UNESCO, and held in Rome. In 2015, the Sophia Smith Collection at Smith College acquired her papers.

Gage’s work has won many state and national awards, including the Lambda Literary Award in Drama for best LGBT books in the US (The Second Coming of Joan of Arc and Selected Plays), nomination for the Steinberg Award by the American Theatre Critics Association (Ugly Ducklings), international finalist for the Venice Biennale (The Anastasia Trials in the Court of Women), Curve Magazine’s Lesbian Theatre Award (Babe!), the Maine Literary Award in Drama from the Maine Writers and Publishers Alliance (Stigmata), the Oregon Playwrights Award from the Oregon Institute of Literary Arts (The Second Coming of Joan of Arc), national finalist for the Heideman Award by the Actors’ Theatre of Louisville (The Ladies’ Room), national finalist for the Jane Chambers Award by the Association for Theatre in Higher Education (The Anastasia Trials in the Court of Women.), and winner of the Samuel French Off-Off Broadway Festival (Harriet Tubman Visits A Therapist.) Her work has been published by Applause Books and by Samuel French. (Stigmata was a national finalist for the Jane Chambers Award, but was withdrawn because it did not meet the unpublished qualification.)  She has written the first book of lesbian themed scenes and monologues, as well as the first manual for lesbian theatre production, Take Stage!

Her work has been published in 37 anthologies, including three Lambda Literary Award winners. Her award-winning play about lesbians at a girls’ summer camp, Ugly Ducklings, was the subject of a national documentary and anti-bullying campaign that premiered at the Frameline International Film Festival in San Francisco.

Her essays and short stories have been published in the Dramatists Guild Quarterly, The Michigan Quarterly Review, Dignity: A Journal of Sexual Exploitation and Violence, Trivia, Sinister Wisdom, Lesbian Ethics, The Lesbian Review of Books, The Gay and Lesbian Review, and off our backs. In addition to writing the acclaimed Like There's No Tomorrow: Meditations for Women Leaving Patriarchy, Gage has also written four volumes of lesbian-feminist essays on a range of subjects, delivered as "sermons" given by "Sister Carolyn" in her riotously funny Lesbian Tent Revival, which she staged at various lesbian gatherings around the country for a decade. She writes a popular blog on subjects including feminist theatre, lesbian history and culture, child sexual abuse, incest, rape, and women's history. Her blog includes reviews and interviews.

She has been awarded residencies at the Helene Wurlitzer Foundation in Taos (three months), at the University of Maine in Machias, at Hewnoaks Artists’ Residency in Maine, and the Walden Writers’ Residency from Lewis and Clark College.

Gage’s work has been endorsed by acclaimed feminist authors and activists, including Andrea Dworkin, Jewell Gomez, Mary Daly, Phyllis Chesler, Victoria A. Brownworth, Diana E.H. Russell, and John Stoltenberg. She won the national Lynda Hart Memorial Grant from the Astraea Lesbian Foundation for Justice. Gage has also received the Janine C. Rae Award for the Advancement of Women’s Culture from the National Women’s Music Festival. Former recipients include Audre Lorde, June Jordan, Margarethe Cammermeyer, Nikki Giovanni, Del Martin and Phyllis Lyon. In 2009, because of her advocacy for LGBT youth, she was named one of the “Ten Most Intriguing People in Maine” by Portland Magazine.

Gage currently lives on Mount Desert Island, where she continues to write and occasionally perform.