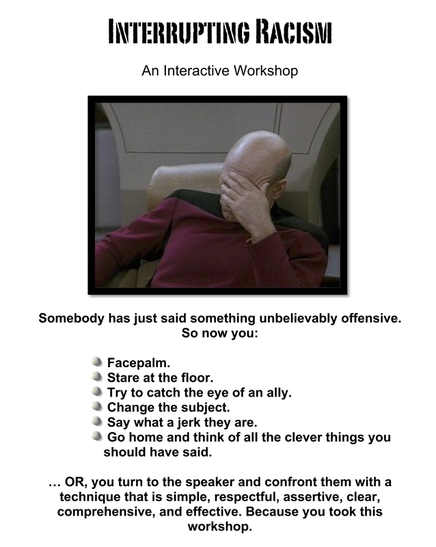 Interview with Gage about the workshop on NPR affiliate station WKAR in Michigan.

"Lesbian Playwright, Performer, Activist on How to Speak Out Against Racism," interview with Brook Rosini, The Rainbow Times, December 5, 2013


We are all so good at thinking of the perfect thing we should have said... a day later.  But is there some way we can prepare ourselves so that we won't be caught off-guard by that racist joke, that ignorant observation, that insensitive comment?  Yes! This is a hands-on workshop to give participants the tools to interrupt racism as it happens. We will learn a simple series of steps, and then we will rehearse them in role-playing situations!  A lively, informative, and PRACTICAL workshop for interrupting racism.


"Carolyn Gage's workshop on Interrupting Racism is one of the best workshops I've ever attended.  I know it will help me in many situations. Carolyn has thought out a way to respond to offensive comments without attacking the speaker. She encourages women to role-play the confrontation. The workshop is upbeat and encourages thinking -- never a bad thing."-- Carol Anne Douglas, a member of the  collective of Off Our Backs: Feminist Newsjournal from 1973 to 2008. 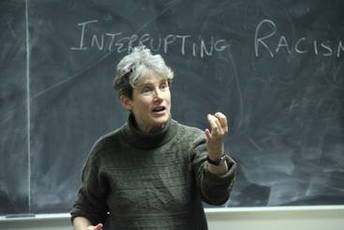 "Carolyn's workshop provides valuable tools for interrupting the everyday individual racist remarks we all come across in a way that may actually change some minds. It works for sexist, classist etc. remarks, too. She provides practice as well as theory. Add it to your anti-racism training." Susan Wiseheart, Old Lesbians Organizing for Change organizer.

"Carolyn gave a very energetic and challenging workshop on Interrupting Racism for the Rainbow Lifelong Learning Institute in the Boston area.  The best thing was how involved everyone got, role playing different scenarios and having dynamic discussions.  The workshop was very well received, and gave us all a lot to think about.  I was really happy at the level of participation of the entire group.Personally, it was very freeing for me to realize the purpose of the confrontation is not necessarily to change anyone's mind at the moment, or to engage in arguments, but simply to interrupt the behavior and let the person know you object to what was said." -- Marsha Gerstein, Rainbow Lifelong Learning Institute of Boston.

"I never have to just walk away any more. Now I have verbal tools..." -- Jacqui Wells.

"This evening Carolyn Gage presented her Interrupting Racism workshop here at Sugarloaf Women's Village. It was both fun and serious, with role playing of her excellent technique. I think we all learned something valuable about how to deal with the uncomfortable situations we can find ourselves in with family, friends, and co-workers or employers who consciously or unconsciously behave/speak in racist, stereotyping terms. Her technique is simple, effective, and empowering. Thank you, Carolyn." --Bonnie Netherton.