Battered on Broadway
A Vendetta in One Act 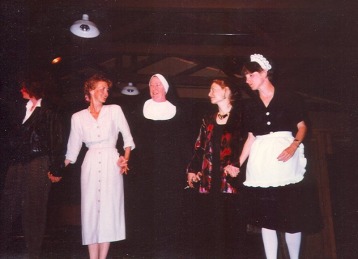 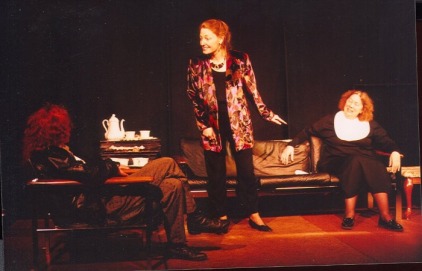 Nellie Forbush of South Pacific is in Mame’s Manhattan penthouse to host a benefit luncheon for a Broadway Battered Women’s Shelter. Her guests include Bess of Porgy and Bess, Julie Jordan of Carousel, Sally Bowles of Cabaret, Mei Li from Flower Drum Song, Maria from West Side Story, and Aldonza from Man of La Mancha. These women, most of them now in their sixties, look back in horror on their various onstage rapes, batterings, and partnerings with inferior men.

Orphan Annie puts in an unexpected appearance and is outraged to discover that Daddy Warbucks has donated the money to buy the building for the shelter. She tells Nellie that when the reporters arrive, she will expose him as a child molester. Nellie is concerned that this will jeopardize the project. She threatens to have Annie arrested if she doesn’t leave. Sally Bowles intervenes, and Annie is in for a surprise when the nun reveals her secret identity and initiates Annie into the mysteries of an underground men-killing vigilante group.

Battered on Broadway is a theatrical tour-de-force, combining the farcical romp of comic strip characters with the conventions of an old-fashioned murder mystery in a plot which not only rewrites the history of musicals from a woman’s point of view, but which also tackles the most divisive social issue of the 90’s: violence toward women. A play with many layers!