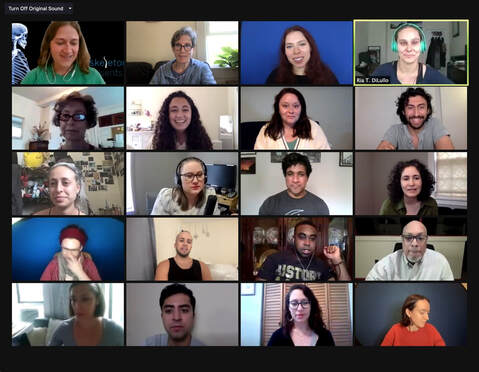 The 2021 reading by The Skeleton Rep
A radical feminist retelling of the traditional Purim story from the Bible—a retelling that foregrounds the part of the story that is glossed over in the patriarchal text, namely, the sexual colonization of women.

Esther, a radical Jewish lesbian living in exile, and Vashti, a Persian woman of privilege, were lovers. Complying with her family’s expectations, Vashti has married the king of Persia, but Esther cannot interpret this as anything except a betrayal and an abandonment. When Vashti encourages a Persian captain to court Esther, Esther is outraged and goes to the palace to confront her former girlfriend.

The ambitious vice-chancellor Haman has been stirring up anti-Semitic sentiment among the officers of the Persian army, in order to use a massacre of the Jews to divert attention from his usurpation of the throne.

In the meantime, during Esther’s visit to the harem, the king is holding a banquet for his officers—a banquet that features the rape of one of the women from the harem. Vashti is shocked and terrified when she discovers that she has been called to “dance” for the officers. Esther engineers her escape from the palace, and the two women go underground, hiding in the homes of Jewish women.

Esther is discovered by Haman during a roundup of eligible virgins as candidates for queenship. Vashti, knowing that Esther could never submit to sexual violation, goes to the palace to die with her lover. The play reaches its dramatic climax when the plight of the two women coincides with the palace takeover by the army, a revolt of the harem women, and a daring rescue attempt by Jewish vigilante women, led by Esther’s young cousin.

Esther and Vashti attempt to avert the impending massacre of the Jews by issuing an edict granting the Jews permission to arm and defend themselves against their enemies. This mandate for self-defense is ritualized in the final scene, when the Jewish women and the harem women join together to commemorate the anniversary of their victory and to pledge themselves to the defense of their daughters and each other.

This is a fast-paced, high-action drama where the love story of two women of different cultures and class backgrounds plays itself out against a backdrop of anti-Semitism and the sexual colonization of women.