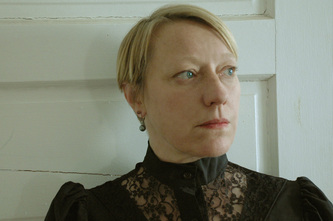 Photo by Amy Jorgensen
Karen Ball (Emily Dickinson) Karen Ball is an actor, director, and teacher.  In addition to playing Emily, she has performed other Carolyn Gage roles—Nance O’Neil in The Greatest Actress Who Ever Lived, Harriet Beecher Stowe in Speak Fully That One Awful Word, and Annie Fields in Deep Haven.  She’s a member of Acorn Productions’ Naked Shakespeare Ensemble, in which she’s played Lady Macbeth, Gertrude, and Macduff.   She co-teaches Acorn’s Teen Shakespeare Conservatory.

Tobias D. Elliott (Director, Sound Designer, Producer) Tobias Elliott has previously directed Neil Labute’s The Shape of Things for the University of Southern Maine in 2005, for which ACTF selected him as one of six student directors nationally to compete at the Kennedy Center, in Washington, DC.  He also enjoys writing scripts, poetry & short stories as well as creating electronic music under the moniker “carnassial” in his free time.  Emily & Sue is his return to the world of theater after a lengthy hiatus, and hopes that it is the beginning of more creative endeavours to come.

Carolyn Gage (Adaptor) Gage is a lesbian feminist playwright, performer, director, and activist. The author of nine books on lesbian theatre and sixty-five plays, musicals, and one-woman shows, she specializes in non-traditional roles for women, especially those reclaiming famous lesbians whose stories have been distorted or erased from history. She won the 2011 Maine Literary Award in Drama, and in her collection of plays The Second Coming of Joan of Arc and Selected Plays won the Lambda Literary Award in Drama, the top LGBT book award in the US.

Merry Gangemi (Assisted with Adaptation) Merry Gangemi produces and hosts Woman-Stirred Radio, a queer cultural journal that broadcasts  and streams live on WGDR/WGDH (Plainfield).  She is a co-editor of Sinister Wisdom, and assistant librarian of her town's community library. She writes book reviews for Lambda Literary Foundation.  Gangemi holds a BA from NYU; an MA in comparative literature from SFSU; and a dual-genre MFA from Vermont College of Fine Arts.  Her fiction and poetry has been published in the US and the UK. Gangemi is married to Elizabeth Hansen. They live in the woods in northern Vermont.

Laura Powers (Video) Laura Powers is a student at the University of Southern Maine, majoring in media production.  Previously, she has written & directed several short films, including her most recent "From the Heart," a short documentary piece focused on refugee loss & healing, through the Center for Grieving Children.  Currently, Laura has a number of projects in the works, including the adaptation of her first feature-length for film from the script "november/december" by Tobias D. Elliott.  She also enjoys yoga and dogs, particularly her familiar Darley.  She lives and works in Portland, Maine.