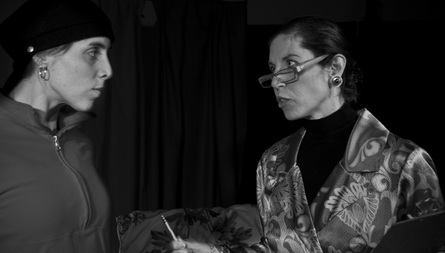 Dr. Lorraine Livingstone leads women’s tours to ancient, sacred sites of goddess worship. She and five members of her tour are gathering at an inn on the Burren of Western Ireland for a tour of Celtic sites. The guests include a feuding lesbian couple on their way to China to adopt a baby, a celebrated author of best-selling murder mysteries, a frivolous divorcée, and a mysterious last-minute arrival.

It’s February 2, Imbolc—the Celtic celebration that marks the end of winter and the beginning of spring. It’s also the season when, according to legend, the Greek earth-mother goddess Demeter emerges from the Underworld with her rescued daughter Persephone. The theme of lost daughters haunts the inn and its inhabitants, as mysterious voices and artifacts point to the murder of a girl-child, and each of the guests admits to some form of betrayal of the sacred mother-daughter bond.

Lorraine is haunted by the memory of the out-of-wedlock child she was forced to relinquish at sixteen. The divorcée laments her failure to fight harder for the custody of her children. The lesbian partners, still bedeviled with the demons of their own childhoods, debate the wisdom of becoming mothers.

The inn harbors a secret that is shared by the mysterious innkeeper Bridie and her nemesis, the author. Their history unfolds as a backdrop to the secret history between Lorraine and her mysterious latecomer.

This is a murder mystery with all the classic ingredients: the dark and stormy night, the remote location , the strangers at the inn with their mysterious pasts, the ghostly intrusions, the attempted murder, and the obligatory gathering of the guests in the parlor for the final dénouement.

What sets The Goddess Tour apart from the genre is the depth of exploration of the potentially murderous dyad of mothers and daughters, pitted against each other in a struggle for survival in a corporate, capitalist, colonialist world. Celtic ritual and goddess lore are interwoven with sacred imagery of gestation and birth, as these are counterposed with legacies of violence against women and children, the brutal history of Ireland’s colonization, and the horrors of slavery on the American continent. Class and race divisions inform discussions of adoption, with a pervasive critique of “globalization” and its impact on motherhood. A good, old-fashioned murder mystery that packs a feminist punch.