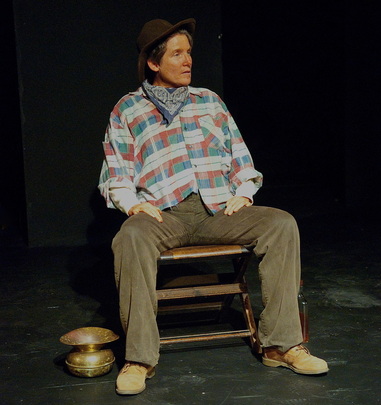 Gage as Calamity
This work is based on the real Calamity Jane. Vulgar, debauched, and raunchy, Jane is considered a freak by women and a laughing stock by men. Without the strictures of compulsory heterosexuality, she might have had the freedom to live the life of a roughrider without having to pass as a man. She might have been given the place in history which was accorded to her sidekick, James Butler Hickok. And she might have found a way to satisfy her frustrated desire for acceptance by women.

Jane is a butch woman who had the misfortune to be born in an era before lesbian culture. She is a feisty woman with a keen sense of humor, who has kept herself going with a number of destructive myths which are familiar to all of us. 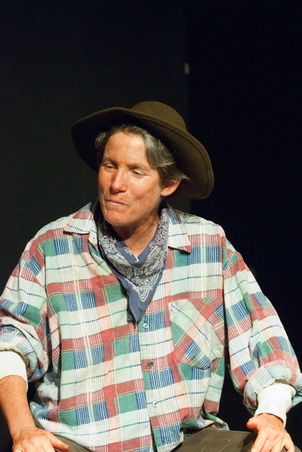 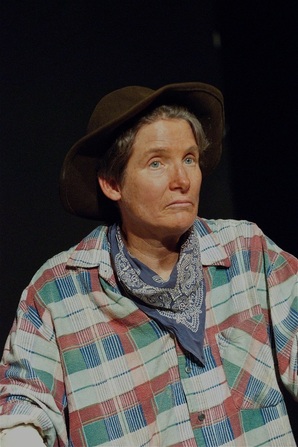 “Calamity Jane Delivers A Message to Her Daughter was one of the best acting performances of this [Dublin International Gay Theatre] Festival. Carolyn Gage was mesmeric as the aging infamous female cowboy recalling happier times. Both writing and performance were of the highest standards and it was a riveting piece of comic theatre… you could almost smell the booze!” --Gordon Farrell, Queer ID, Dublin.

“… Carolyn Gage is one of the best lesbian playwrights in America…”--Lambda Book Report, Los Angeles.

“The work of an experienced and esteemed playwright like Carolyn Gage is the air that modern theatre needs.” — Jewelle Gomez, author of The Gilda Stories, San Francisco Arts Commissioner.

“Carolyn Gage is a fabulous feminist playwright, and a major one too. This is great theatre. Gage’s dramatic and lesbian imagination is utterly original… daring, heartbreaking, principled, bitter, and often very funny… There is no rhetoric here: only one swift and pleasurable intake of breath after another… Women’s mental health would improve, instantly, were they able to read and see these plays performed.”—Phyllis Chesler, author of Women and Madness.

“… the toughest, most lesbian/feminist-identified work for theatre I know… brilliant and daring scripts...” —John Stoltenberg, former Executive Editor, On the Issues, author of Refusing to Become A Man.

“Carolyn Gage is to lesbian playwriting as Georgia O’Keefe is to women in American art: You can scarcely think of one without the other.” --off our backs, Washington, DC.

“Ever since I first saw Carolyn Gage perform her work, I have been convinced that she is one of our greatest living artists… the value of Gage’s plays goes far beyond their ability to hold and entertain audiences. I know of no living playwright who is grappling with issues as controversial and as central to the survival of our people as Carolyn Gage. Possibly the most potentially transformative work of our time is the work on trauma conducted by psychologists and academics as well as within feminist and recovery movements. By joining her intellectual and political engagements with these movements to her considerable skills as a dramatist, Gage creates plays that bring the “magic” back to theatre. I have seen many of her plays performed – among them, The Second Coming of Joan of Arc, Sappho in Love, Harriet Tubman Visits A Therapist, and Artemisia and Hildegard. The impact of these performances on audiences is profound and life-changing.  I can also attest to Carolyn Gage’s rapport with university students and faculty… I sponsored a lecture and performance by Carolyn Gage on our campus. These events were well-attended and enthusiastically received by the faculty, students, and community members who attended. Carolyn Gage was on my campus for four days and throughout that time she was most generous in making herself accessible to students. In the discussions with her audience and during small group meetings with students, Carolyn was lively, provocative, brilliant.”—Dr. Morgne Cramer, Dept. of English, University of Connecticut, Stamford.