Online reading and talk-back with playwright 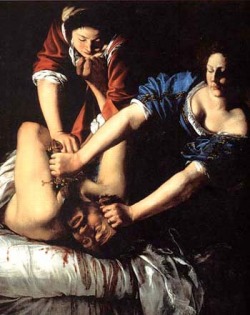 Artemisia and Hildegard is a complex and powerful two-woman show, featuring two of the most famous women artists in history, together on an explosive arts panel about survival strategies for women artists.

Hildegard Von Bingen, German abbess from the 12th century, and Artemisia Gentileschi, Italian baroque painter from the 17th century, have been scheduled as guest speakers on a panel titled, “Women Artists: Strategies for Survival.” As the women display slides of their work, the sparks begin to fly. Confronted with conflicting philosophies, each woman attempts to take control of the evening’s agenda.

Hildegard, whose art is multi-disciplinary and created in an all-women collective environment, has strong words for the woman who does her art for hire. Likewise, Artemisia, who struggled hard to achieve the same status and independent income as her male contemporaries, has a lot to say about the so-called virtues of poverty and humility. She resents the accusation from women that she is “just like a man,” because of her commercial success.

But the debate takes a personal turn when the women are pressed to defend their positions. Both women are compelled to reveal secrets of their childhood, secrets which have shaped their strategies for survival. Hildegard’s parents banished her to a convent at the age of eight, where she was walled up for ten years in a cell, a form of extreme religious renunciation she “practiced” as an anchoress. Her rationalization of this trauma into a form of spiritual blessing requires an elaborate mythology about a mystical calling and special relationship to the deity.

Artemisia was raped at sixteen by her father’s colleague who had been hired to give her lessons on perspective. Her possessive and covertly incestuous father exposed her to a humiliating public trial, which involved an examination of her vagina and the administration of torture to determine if she were telling the truth. Artemisia has devoted her life to downplaying the role of gender in her life and in her art.

As the women struggle to justify their choices, choices which invalidate each other’s work, they find themselves exposing the contradictions in their own lives. The panel ends on a dramatic high note, as the audience is recruited in the debate about strategy for women artists in patriarchy.