St. Frances and the Fallen Angels 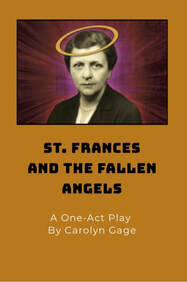 St. Frances and the Fallen Angels is a lesbian ghost story, a lesbian romance, an historical play about Frances Perkins and the New Deal, a "Christmas miracle" play... all rolled into one. It's also a play that is deeply engaged with the issue of activist burnout.

It’s a Friday night—December 21, 1934—and three ghosts visit Frances Perkins during her weekend retreat at an Anglican convent. It is the end of Franklin D. Roosevelt’s second year as President and the end of Frances’ second year as his Secretary of Labor. FDR, after throwing a number of obstacles in her path, has intentionally given her an impossible deadline: Three days to complete all of the work on the proposed “old age insurance” (aka “Social Security”) bill. The ultimatum is that the work must be on his desk by Christmas Eve, or he won't present it to Congress.

Meanwhile, Frances’ life partner, the heiress Mary Rumsey, has unexpectedly died earlier in the week, and Frances is alone and overwhelmed by a grief the rest of the world will never acknowledge. All of this has taken a toll, and Frances has made a decision to abandon the bill and resign her Cabinet post.

The play opens when two ghosts, victims from the Triangle Shirtwaist Fire of 1911, climb through the window. (They have been haunting Frances, who witnessed the disaster, for 23 years.) They argue over the ethics of haunting her on this night. A third apparition arrives: the ghost of Mary Rumsey, who has her own unfinished business with Frances. One of the ghosts, a union leader, has strong emotions about the ghost of the richest woman in America, and a fierce struggle ensues. A surprise revelation opens a path for both personal and political reconciliation, and the resulting alliance is responsible the for why we have Social Security today