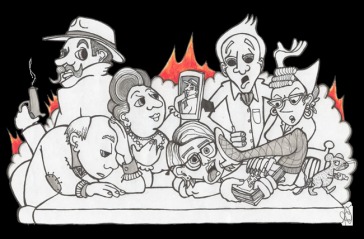 Graphic from Victoria, BC Production
“Absolutely the BEST of the "insider" plays about community theatre we have read. A satire exposing whilst exemplifying all the elements of bad playwriting.”—International CringeFest, NYC.

Five members of a play selection committee have gathered in the Green Room to choose the plays for their Festival of Poorly-Written Plays. The artistic director begins with a review of the more common criteria for a bad play: blatant exposition and contrived names for the characters. He then suggests that they all go around the table and introduce themselves and say a little something about themselves—blatant exposition if ever there was. As he calls on Hedda, the literary manager, and Mrs. Bracknell, the benefactress, it becomes obvious that the folks around the table all have contrived names.

And so it goes—the committee enacts every broken rule of playwriting in the course of their wrangling over their selections of bad plays. These broken rules include the use of asides, characters who unaccountably reverse their positions, overly-complicated relationship histories, unrealistic set requirements, mysterious strangers, phony disguises, implausible explanations, significant action that takes place offstage, reference to scenes that have been cut from the script, and the setting up of the expectations of the audience only to disappoint them.

This is a hilarious “actors nightmare” for playwrights, guaranteed to delight audiences, whose attempts to follow the action are constantly frustrated by the dramaturgical liberties of this “poorly-written” play. The incoherencies and inconsistencies build to a frantic climax, as the artistic director, faced with a plethora of plot difficulties, resorts to the cheesiest playwriting device of all.