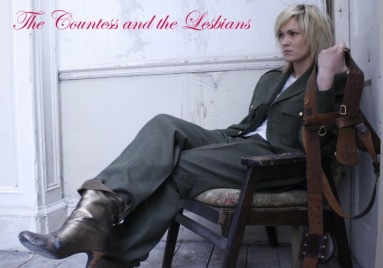 Dublin International Gay Theatre Festival Production with Gina Costigan
“… an intelligent and witty look at the parallels between the Irish struggle and the struggle for gay rights… As the play unfolds, tensions between the characters surface not only because of the tricky love-triangle, but also due to the more contentious and telling political sympathies and views of the women… cleverly written and lucid… ” [Five-star rating]     --The Metro, Dublin, Ireland.

“… a spirited dramatization of women’s involvement in the Easter Rising… The historical elements of the play are intriguing… engaging a broader narrative of feminist history.” --Irish Times, Dublin.

“Michael Collins meets The L-word? As unlikely as this sounds, Carolyn Gage’s provocative new one-act, The Countess and the Lesbians, pulls it off beautifully, while still managing to be that brave and sometimes daunting thing, an intellectual play about political issues… the graceful pacing, creative characterisations, and flashing good humour of this highly intelligent script means that it’s entertaining instead of polemic, a rousing good piece of theatre with a thoughtful message… an important play and a highly satisfying piece of theatre in its own right.” --Queer ID, Dublin.

“… some great one liners and wonderful comic construction peppered throughout a solid feminist argument that few could fault about recognition and identity… professional, perfectly-pitched and thought-provoking… The Countess and the Lesbians is a fascinating deconstruction of a time of Irish heroism, posing questions you’ll be talking about for days afterwards.”—Gaelick, [online magazine], Ireland.

“If Countess Markiewicz is sometimes overlooked, Eva is completely ignored in history. Before we did the play I had never heard of Eva Gore-Booth, but these women, these lesbians are part of our history and I think that the full houses prove that people are willing to re-educate themselves.” —Gina Costigan, Ballindoon Productions, Dublin.

Kathleen is directing a play about Countess Constance Markiewicz, after her arrest for her participation in the Easter Rising. The play is based on the writings by the Countess, by her sister Eva Gore-Booth, and by her sister’s life companion Esther Roper.

Kathleen’s partner Grace is performing the role of Eva, while Kathleen plays the Countess. Their real-life relationship mirrors the dynamic between the sisters: Grace, who despises conflict, plays a supporting role to Kathleen, who is multi-talented and very ambitious. Nan, playing the role of Esther is in love with Grace, and she becomes increasingly aggressive in challenging Kathleen’s directorial and dramaturgical choices.

When Kathleen fires Nan from the play, Grace produces excerpts from a play by Eva Gore-Booth, The Death of Fionavar, and requests that they do a reading of them. In the play, Eva has used a tale from Irish mythology to illustrate her political differences with her sister. Fionavar, the Queen’s daughter, is so upset by the sight of bloody corpses, she falls dead—even though her mother was the supposed victor.

As the women wrestle with their pride and their options, they make a radical choice to continue to cling to the wreck of the rehearsal process until there is some light. The play, like the love of Ireland among the historical characters, is a thing that unites them and that transcends their ego, and as they continue to inhabit the characters, the actors discover that the script becomes a vehicle for expressing and transforming their emotions. As the template for their former relationships is shattered, they use the Irish play as a temporary structure from which they can begin the process of rebuilding.

"The Countess and The Lesbians" by Gordon Farrell for QueerID.com, May 14, 2008.