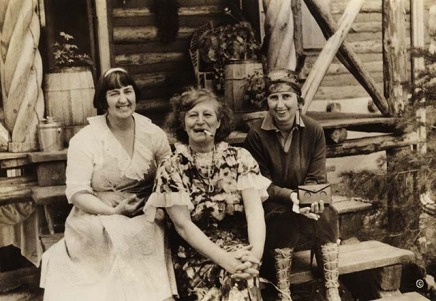 In this play, Taos painter Dorothy Brett, 73, is entertaining us in her 1956 studio, when her reminiscences are interrupted by the ghost of her younger self as she was in 1924, when she first accompanied D.H. Lawrence and his wife Frieda to New Mexico with the plan of establishing a spiritual and artistic community.

“Younger Brett” is hopelessly and obsessively in love with Lawrence, and her soliloquies are addressed to the object of her adoration. She continually attempts to uncover the mysterious painting on the easel, which is a copy of a painting Brett destroyed thirty years earlier.

Brett’s memories include the “Bloomsberries” who gathered themselves at the estate of Lady Ottoline Morrell during World War I, as well as Tony and Mabel Dodge Luhan, at whose invitation the Lawrences had come to New Mexico. She shares more personal memories of her adult-onset deafness and the incident of childhood sexual molestation to which she attributes her lifelong sexual reticence.

Younger Brett continues to interrupt the narrative with her more immediate and emotionally raw memories of Lawrence during the years at the Ranch.

Finally Brett breaks her silence about the tragic night when Lawrence attempted unsuccessfully to make love to her. This memory unveils the mystery of the painting, and Brett is finally able to make peace with herself, inviting the Younger Brett to collaborate on the finishing of the painting.