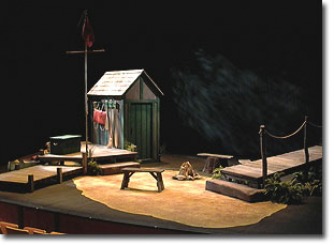 Colby College production, Waterville, Maine
Ugly Ducklings picks up where Tea and Sympathy and The Children’s Hour left off. Set in a girls’ summer camp, the play explores the dynamics of homophobia in a same-sex environment.

Ugly Ducklings examines the unhealthy turns that relationships between girls can take when they are not allowed their natural expression. The so-called “Ophelia Syndrome” comes alive as the cabin of younger girls, their self-esteem still reinforced by the primacy of their relationships, comes into contact with the older girls who have begun to turn against themselves and each other in their attempts to conform to the pressures of compulsory heterosexuality.

Angie, a middle-class college student, is falling in love with another counselor at the camp, Renée, who is a working-class “out” lesbian. Against this backdrop of intense homophobia, the young women struggle with their feelings for each other and the problems of defining themselves in a society that insists they be invisible. The camp legend about a monster in the lake parallels the adult phobias about lesbianism, and, confronted with an attempted child suicide, campers and counselors are compelled to face their worst fears in the microcosmic world of the summer camp.

Ugly Ducklings breaks ranks with male-centered queer drama in foregrounding the experience of women and girls who are survivors of sexual violence and shattering romantic and sentimental conventions about the “gentle sex.” 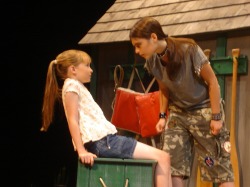 “If it is possible that a piece of theatre can be both gritty and sublime at the same time, then Venus Theatre has achieved it in their world premiere production of Carolyn Gage’s Ugly Ducklings." Metro Weekly Review, Washington, DC.

“… deserves a central place in the lesbian feminist literary canon...” --off our backs, Washington, DC.

“… refreshingly well told tale that while raising all the issues that this anti-homophobic company and playwright want to raise, does so with an admirable restraint, avoiding the obvious traps of sensationalism and titillation and striking an admirable balance of theatricality and realism.” --Potomac Stages, Washington, DC.

“… a play about coming of age and homophobia and how people deal with emerging understandings about sexuality. It’s a tough, tough, tough topic, and it’s handled here with a great deal of raw energy, but also with a great deal of subtlety… a very, very nice piece… definitely worth seeing.” --Peter Fay for WAMU (NPR affiliate station), Washington, DC.

“Radically redefining beauty… Ugly Ducklings reveals how notions of homosexuality can shatter the souls of girls and women… an impressive work… a brutally honest examination of what it means to be a young lesbian...” --The Washington Blade, Washington, DC.

“… like the best drama, Gage’s play is filled to bursting with sharp-edged double meaning and irony… accessible and engaging format, with the social consciousness of Ibsen and Shaw...” —Assunta Kent, Phd., from introduction to At Play: An Anthology of Maine Drama.

'Ugly Ducklings: Scary Fairy Tale with a Happy Ending' by Kate Bornstein, in Kate Bornstein's Blog for Teens, Freaks and Other Outlaws, Dec. 17, 2006.

'Ugly Ducklings: A Playwright Teaches How to Play right!' by Georgia Jacobson in New Moon: Magazine for Girls, Sept.-Oct. 2007.

'United States: Play About Homophobia Nominated for National Award' by Carol Anne Douglas in off our backs, Nov.-Dec. 2004.

'The Ugly Ducklings Campaign' by Carolyn Gage in the Maine Women's Journal, Winter 2006.

'Ugly Ducklings: How I Came to Write a Play Where the Lesbian Doesn't Kill Herself' by Carolyn Gage, On the Purple Circuit, 2009.

'From Ugly Ducklings A Powerful Message of Hope, Decency' by Bob Keyes, in the Maine Sunday Telegram, September 11, 2005.

'Radically Redefining Beauty' by Kim Krisberg in The Washington Blade, Washington, DC, May 7, 2004.