The Parmachene Belle
Written and Performed by Carolyn Gage
Synopsis: 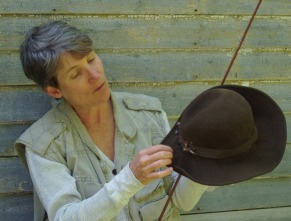 Gage as 'The Parmachene Belle'
Cornelia Crosby, a 19th century lesbian, was the first licensed hunting guide in Maine. Six feet tall and known as “Fly Rod,” she led fishing and hunting expeditions for wealthy vacationers in the Rangeley Lake district.

The play opens on the day that Fly Rod, who has been sidelined to a hospital bed in Portland with a serious knee injury, is scheduled for surgery. She may, in fact, never walk again. This prognosis poses a threat not only to her livelihood, but also to her plans to rendez-vous with Annie Oakley in New York at the annual Sportsman’s Exhibition. Having listened to the stories of Annie’s sexual abuse as a child, Fly Rod has become obsessed with “rescuing” her.

Hoping to lure Annie away from the Wild West Show, Fly Rod proposes to teach Annie the art of fly-fishing. Explaining the difference between “imitations,” the flies designed to replicate actual species of insects and “fancies,” the flies that make no attempt to resemble anything except themselves, Fly Rod notes that she and Annie are “fancies”—like the Parmachene Belle. It is her dream to wean Annie away from her obsessive practice with gun 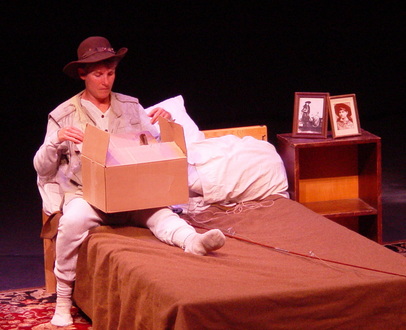 "Fly Rod" Opens a Gift from Annie Oakley
Fly Rod’s optimistic fantasizing is disrupted when she opens a gift that Annie has sent her. It is an arrow case that belonged to the famous Indian warrior Sitting Bull. Disturbed by the potential meaning of the gift, Fly Rod reflects on the death of Sitting Bull, who was killed for his participation in the Ghost Dance, a form of ecstatic trance-dancing believed to bring back the buffalo and get rid of the white man.

Outcasts, misfits, and survivors—Annie, Fly Rod, and Sitting Bull all struggled to invent ways to continue in the face of shattered dreams and hopeless prospects. Fly Rod, in her monologue, wrestles with her fears and negotiates the fine line between faith and denial as she constructs a system of belief that will hold some possibility of happiness for her, a lesbian in a heterosexual man’s world. 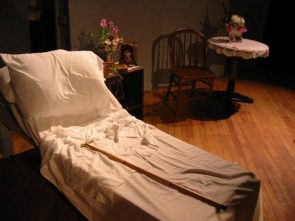 Set for The Parmachene Belle

“… Carolyn Gage is one of the best lesbian playwrights in America…”--Lambda Book Report, Los Angeles.

“The work of an experienced and esteemed playwright like Carolyn Gage is the air that modern theatre needs.” —Jewelle Gomez, author of The Gilda Stories, San Francisco Arts Commissioner.

“Carolyn Gage is a fabulous feminist playwright, and a major one too. This is great theatre. Gage’s dramatic and lesbian imagination is utterly original… daring, heartbreaking, principled, bitter, and often very funny… There is no rhetoric here: only one swift and pleasurable intake of breath after another… Women’s mental health would improve, instantly, were they able to read and see these plays performed.”—Phyllis Chesler, author of Women and Madness.

“Carolyn Gage is to lesbian playwriting as Georgia O’Keefe is to women in American art: You can scarcely think of one without the other.” --off our backs, Washington, DC

"The whole selection felt musical to me as an audience member. It was a great read on page, but aloud all those names of flies, when coupled with that Maine accent, and all those wacky verbs, were something else. You had the bar up in stitches laughing and then brought them back down to tenderly explain the metaphor, and the love. It was fantastic."-- WordPortland


Online Articles about Gage's performance of The Parmachene Belle