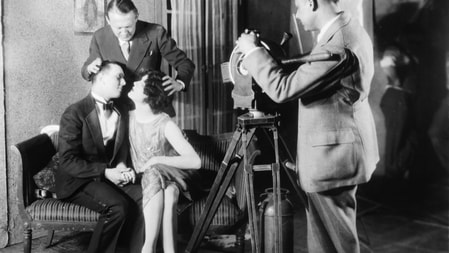 Lights come up on the interior of a room in a present-day brothel. Jewell, wearing a robe, is preparing for an assignation with a client.  There is a knock on the door and Stan enters. He is late because of traffic and annoyed that Jewell will not extend the appointment. As his pants come off, Jewell notes that he needs to leave his belt at the reception desk downstairs. He is annoyed to be losing any more time. On his return, he undresses for a second time, but there is another knock on the door and Jewell goes to see who it is. It’s Marsha, who claims she is an intimacy coordinator that the brothel has hired to ensure the safety of clients and staff. Stan, with growing frustration, puts on his pants again, as Jewell allows Marsha to enter.

As Marsha starts to explain that intimacy coordinators are hired in theatre and film to protect the performers, Stan interrupts, protesting that the sex is not going to involve scenarios or anything dangerous—in other words, no theatre. Marsha points out that Stan will be having a sexual experience, but that Jewell will not. She will actually be performing the role of a woman who is desirous of his attention, and this will require the mutual signing of a consent form.  Stan is unable to grasp this concept, and, exasperated, Jewell orders him to leave, holding out his pants.

After Stan’s departure, Jewell confronts Marsha, accusing her of being an evangelist or a man-hater. Marsha reveals she is a former prostitute, and Jewell calls her out on her “sex policing,” insisting that consent is already institutionalized in the brothel.

Marsha counters with shocking percentages of prostitutes with sexual abuse histories and percentages who express a desire to leave, but who are trapped by lack of resources. She points out that prostitution will never lose its stigma until these victims and captives are gone and that, when they are gone, women like Jewell will be able to name their prices.

Jewell, who has put up a good front, is actually intrigued and asks Marsha to make an appointment with her in a week. Marsha goes to shake hands with Jewell, and Jewell counters with a reference to the language in the consent form: “Skin, muscle, or bone?” Marsha responds with “Bone—Touch Level Three” and they shake.