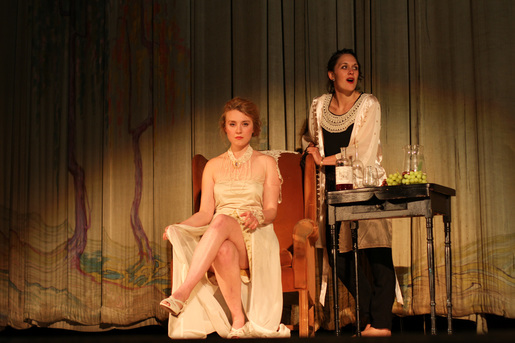 From the Bar Harbor production
Souvenirs from Eden is a play about a survivor struggling to make peace with memories of betrayal and abandonment. In the play, the ghost of the lesbian poet Renée Vivien appears before us to reconstruct her memory of a summer in Bar Harbor, Maine, (then named “Eden”) in 1900, when she was the guest of her lover Natalie Barney, who would later become a celebrated salonist. Both women were very young and very wealthy.

Renée’s attempt to revisit the memory in order to gain closure is disrupted by the Retriever of Memory, who acts as a stage manager for the scene she attempting to restage. The Stage Manager mismanages props, and the chimera of Natalie continually goes “off script,” refusing to conform to a narrative that would demonize her.

The Stage Manager introduces a more primal scene of betrayal by her mother that is at the heart of Renée’s psychosis. Renée, refuses to participate, protecting the perpetrations of her mother. In a final attempt to rescue Renée from her own distorted thinking, the Stage Manager presents a scene from Natalie’s path that offers the solution.

Renée rejects this solution and, sealing her own doom, by choosing the obsessively looping drama of a lover’s betrayal. The play ends where it begins, with her suicide.