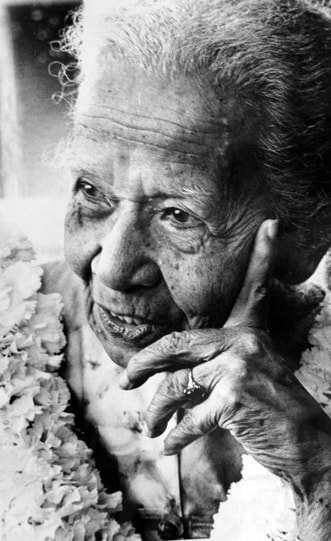 Lydia Kaʻonohiponiponiokalani Aholo
“Mahalo nui for your play. It is splendid, clever, and sets the characters in an imaginary world that is, nevertheless, quite believable. The mark of superb craftsmanship…! Ku’e, ku’e,ku’e! [Resist, resist, resist!] — Haunani-Kay Trask, leader of the  Hawai’ian Sovereignty Movement.

The play opens in 1969, with Dr. Evelyn Bateman, a white college professor, interviewing Miss Lydia Aholo, a ninety-two-year-old Native Hawaiian. Miss Aholo is the hanai (“adoptive”) daughter of Queen Liliuokalani, the last queen of Hawai’i. Dr. Bateman is preparing to write the first Western biography sympathetic to the Queen, detailing her overthrow by the US government.

During the course of the interview, Miss Aholo reveals that the Queen entrusted her with a mission before her death. She asked her adoptive daughter to answer the question that tormented her at the end of her life: “What did I do that was so wrong that I should lose my country for my dear people?”

Dr. Bateman is shocked by the question, insisting that the Queen was a helpless victim of a colonial effort that had its beginnings before she was even born. Dr. Bateman is adamant that the Queen could have done nothing to change the course of history. Miss Aholo is equally insistent that there is an answer to the Queen’s question and that the future for Native people depends on an understanding of this answer.

As the Western liberal historian and the Native woman struggle with the metaphysics of language, colonization, and victimization, their collaboration begins to unravel. When Dr. Bateman recounts an anecdote about a visit to Queen by three Native kahunas, or priestesses, urging her to join them in an act of civil disobedience involving the recitation of the Pele Chant, Lydia finds the answer to the Queen’s question—and with it, the secret of spiritual decolonization.