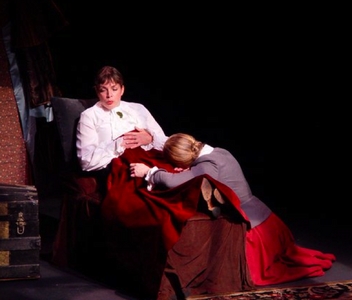 Maine Production of Deep Haven
Deep Haven takes the audience through the life of 19th century Maine writer Sarah Orne Jewett, beginning with her tomboy childhood and ending with her touching final communications with her life partner Annie Fields.

The text of the play is adapted from Jewett’s novels and letters, as well as from the poems and diary entries of her juvenilia.

Apparently, Jewett’s father, a country doctor, identified that his daughter, from a very early age, was destined for a different life than the traditional New England wife and mother. He consciously set out to prepare her for an independent life, and in the play, Jewett shares his theories about rearing a gender-deviant daughter in citing A Country Doctor. 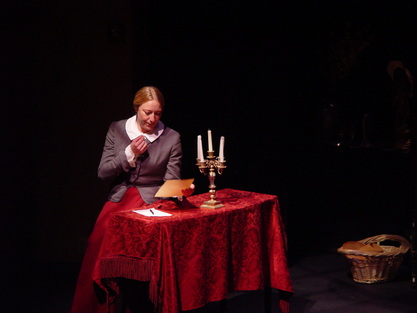 Annie Fields Reads a Letter from Her Beloved
Jewett’s frustrated love affairs with young women are chronicled in the empassioned poems she writes, attempting to persuade them to stay to true to her. In fact, their abandonment of her in favor of heterosexual marriage was probably less about fickleness of heart and more about wanting children as well as economic security.

It was not until Jewett met Annie Fields, a widower and philanthropist, that she found her love and her longing for security reciprocated. Seeking approval for their unorthodox union, both women attended séances to communicate with the spirits of Jewett’s dead father and Fields’ dead husband. 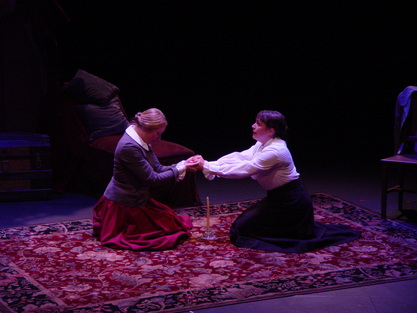 Fields and Jewett Hold a Seance
This was the era of the Boston Marriage, before the sexologists of the next century would begin to pathologize same-sex orientation. The openness and sweetness of the two women’s letters testifies to an era more tolerant than the twentieth century.  This contrast is foreshadowed by lesbian novelist Willa Cather’s exchanges with Jewett toward the end of Jewett’s life. Jewett challenged Cather, a rising novelist, about her needing to adopt a male voice for her narration.

Cather, speaking for a new generation of lesbians who will be called “inverts” by the sexologists and treated like freaks of nature, responds, “It’s always hard to write about the things that are near to your heart, from a kind of instinct of self-preservation you distrust them and disguise them.”

Illuminating the lesbian challenges and joys of her life, Deep Haven pays tribute to the deeply matriarchal and woman-loving stories and novels of one of Maine’s most beloved daughters.

Four women (can be done with two)
Single set
30 minutes