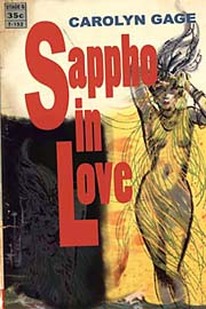 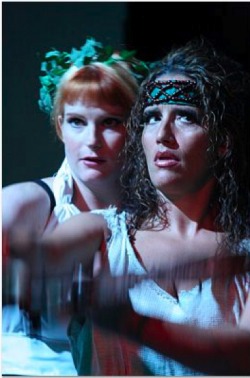 "... hardly a minute goes by that the theater does not fill up with laughter...  entertaining and wildly pleasing to the audience."--The Badger Herald (Univ. of Wisconsin-Madison), Madison, WI.

“… Sappho in Love disproves the old canard about lesbians lacking a sense of humor… These are some funny, funny lesbians.” --Sacramento News and Reviews, CA.

"... deliciously comic, off-kilter...  a charming, affectionate portrait of young women coming to terms with their longings--for both independence and romantic fulfillment." --Chicago Reader.

The following are audience remarks from the public website www.seeaplay.com/productionsReviewsSapphoLP.htm:

“I caught this show last night at their sold out opening and laughed until my sides hurt. Seriously, the whole audience was howling. If you’re in the mood for a great comedy on a weekend night to help beat the heat, this is the one to see. By which I mean I expect this show to sell out fast if last night’s audience has any say in the matter… THE smash hit of the summer.”

"Sappho In Love was a fast moving, funny take on classical Greek comedies. I am not a lesbian, nor was the person I went with, yet we enjoyed it very much. I will probably take some other friends to see this...”

“… Sappho in Love was not what I expected it to be. It was a fun, sassy show that had the audience laughing throughout.”

“My partner and I were looking for a romantic date night activity and happened upon this phenomenal play! Touching, funny, gregarious—well worth the money! For anyone who enjoys the theater, Sappho in Love is one of the most side-splitting two hours you can have! Hysterical, sweet and just a little different! See the play and tell your friends!”

“I thought this play was so funny. I laughed the entire time. I am telling everyone not to miss it. Good job Lambda. One of your best!”

“I watched Sappho on Friday the 18th and must have laughed every twenty seconds for two hours. This play is unique, well-produced, and you shouldn’t miss it… The play is charming, energizing, and I’m so happy to have seen it!”

“You don’t have to be a Lesbian to enjoy the machinations of the three goddesses of love as they plot and scheme to win control of Lesbos and eventually The World! This show is a total romp.”

Sappho in Love is a riotous romp across the slippery terrain of Lesbian romance, as the goddesses on Olympus come down to earth to recruit among Sappho and her followers.

Artemis, the Goddess of Lesbian Celibacy, and Hera, the Goddess of Monogamy, join forces to challenge Aphrodite, the Goddess of Lust, for her hegemony on Lesbos. Sappho, the great poet and teacher on the island, is a devotee of Aphrodite, and because of this, her school has become a center for the cult of lesbian sexuality and romantic love. Artemis, denouncing Aphrodite’s use of her intoxicating nectar to attract followers, vows to found a rival school on Lesbos where young girls will be weaned away from Sappho’s decadent teachings to learn the more sober arts of wilderness survival.

But Artemis underestimates the power of lesbian seduction, when Aphrodite sends Persuasion, her handmaiden, to enroll in outdoor school—and when the Goddess of Celibacy finds herself entangled with the Slave of Desire, she discovers that freedom without intimacy can be as meaningless as intimacy without freedom.

Meanwhile… Sappho herself is experiencing girl trouble when her longsuffering partner, fed up with Sappho’s infidelities, begins to date another woman. Add to the midsummer mix-up, the arrival of a new student who can’t wait to taste the pleasures of Lesbian life, and the painful trials of a student whose best friend is on the eve of leaving the island to marry a soldier.

Sapphic poetry abounds amid meteor showers, midsummer eve trysts, masquerades and melodramas—all overseen by the benevolent trio of lesbian “deae ex machina!” Throw in a rowdy troupe of soaking-wet naiads and it all adds up to a tasty dish of lesbian comedy. In the end, the couples sort themselves out, for better or worse, and Hera pronounces her blessings on a new matriarchal order.

"Sappho in Love Not Quite Godly, But Will Keep Audiences Laughing" by Gabriella Bonamici for The Badger Herald, Madison, WI, Feb. 16, 2010.