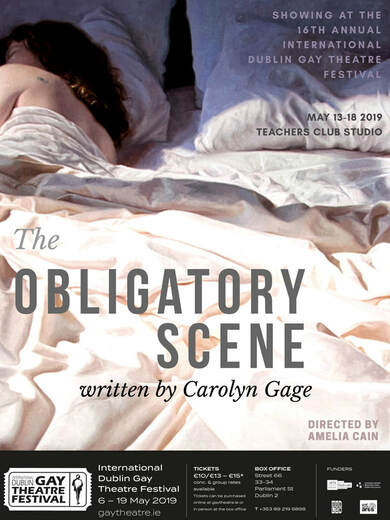 "Carolyn Gage’s Obligatory Scene takes a hard look at the possibilities for women’s sexuality in today’s rape culture, and the result is not to be missed... The writing is witty, warm and hard-hitting, but many of the strongest moments in this production are unspoken." -- Gay Community News,  Ireland

"It is the talk of the Festival..." --Brian Merriman, producer International Dublin Gay Theatre Festival

"Just wanted to say that I saw your play Obligatory Scene at the Dublin Gay Theatre festival. It’s brilliant and insightful. I was moved by the skillful way deep, thoughtful emotion and human relationship was woven with smart and critical thinking. I learned a lot. Thank you for putting good art into the world."--Julie Gieseke

"Poignant and thought-provoking... one of the strongest pieces of the festival..." --Aisle Say Twin Cities

"Frankly, it was nice to see a play with a lesbian couple who didn't break up or die at the end for a change (oops, spoiler alert). Come for the convoluted, amusing emotional argument, stay for them actually staying together." --Twin Cities Daily Planet

The play goes deep into the question of how women's sexuality and rituals for intimacy have been contaminated by patriarchal rape culture. And, more to the point, is it too late to change that? And if it's not, how?

And yet, for all the deep questioning and questing.. it is at heart a playful and radically romantic play.

Ostensibly arguing about The Taming of the Shrew, a lesbian couple come to grips with their own marital struggles and break their deadlock around the issue of sex.

Vivey and Dru are both graduate students, living together in a committed relationship. Vivey’s distress over being assigned to direct a scene from Taming of the Shrew triggers an argument with her partner about the sexual politics of the play. Dru makes the case that the play is subversive, with Petrucchio exaggerating his gender role in order to mock it. Vivey resists this interpretation until Dru cites the dialogue describing the wedding night, where it is apparent that Petrucchio does not have sex with Katharine. On the contrary, he delivers a mocking lecture on abstinence.

On the strength of this argument, Vivey accepts that the play might indeed be about a companionate, or even “passing” marriage. She redirects the conversation to address the lack of sex in their own relationship. Dru, a survivor of child sexual abuse, is reluctant to discuss the subject.

As the argument escalates, the two agree to role-play an exercise in which Dru plays an alien from another planet, describing her experience. The exercise, set up to pathologize Dru, backfires on Vivey, and she discovers that she is more accurately the alien from another planet. Dru’s experiences are universal and pandemic among women, and Dru’s insistence on incorporating that understanding into her practice of intimacy shatters Vivey’s complacency and self-righteousness.

Deeply in love, but deeply self-assertive, both women struggle to avoid playing out the traditional “obligatory scene” of a break-up or a sexual stalemate. The ending of the play points to a radical transformation the holds the promise of healing for both.