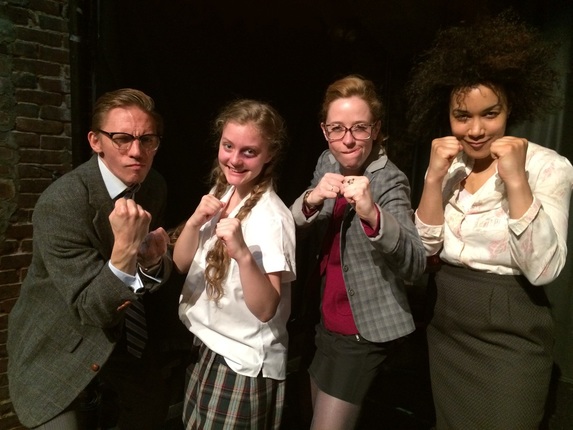 "The struggle between compromise and the refusal to be bullied was humorously and poignantly explored."-- KDHX, St. Louis.

The year is 1953 and the setting is a middle-school principal’s office and the waiting area outside the door. Amanda, a thirteen-year-old tomboy, is waiting disconsolately on a bench. She sports a brand new black eye, and has apparently been fighting.

Her P.E. teacher, Miss Marshall, has been summoned to a consultation about the incident with the principal. On the way to his office, she checks in with Amanda, and the audience understands that she has been coaching the girl on her fighting skills.

When Mr. Kent attempts to terminate the meeting, Miss Marshall admits that she has taught the girl how to defend herself, and she informs him that she believes in fighting. She threatens to “out” Mr. Kent to the school board if he follows through on the expulsion. Mr. Kent is confident that she will not do this, as he knows that she is also in a same-sex relationship. Miss Marshall manages to trump his ace, however, and he agrees not to expel Amanda.

Leaving the office, Miss Marshall has a final, triumphant and subversive interaction with her student.

A woman, a girl, and a man
Single set
Nine minutes