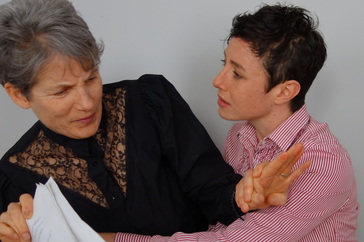 “… crackled with energy and glowed with warmth… illustrated all that is the best about theatre.” ---The Maui News, HI.

“… an overlay of brilliantly ironic humor on the utterly serious issues with which it deals.” --Lithiagraph, Ashland, OR.

Louisa May Alcott has locked her alter-ego, Jo March, out of her study in order to finish Little Women alone. Jo manages to break in. She confronts Louisa about her desire to end their collaboration. Louisa admits her intention to have Jo burn all her writing and marry the aging and self-righteous Professor at the end of the book.

Jo knows her author better than Louisa knows herself, and she begins to uncover Louisa’s true motives in violating her own creation. When Jo introduces evidence of Bronson Alcott’s child molesting and Louisa’s lesbianism, the conflict between Jo and Louisa becomes a life-and-death struggle for control of the book.

"A Big Show About Little Women with Sarah McCoy and Carolyn Gage," Interview with Cindy Wolf Boynton for Literary New England  on BlogTalk Radio, May 1, 2012.

"Skeletons in the Closet: Louisa May Incest and Calamity Jane Sends a Message to her Daughter," by Carol Burbank, Chicago Reader, Jan. 25, 1996.