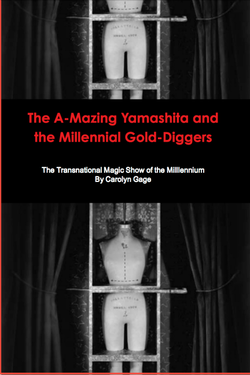 Paperback
eBook (EPUB)
eBook (PDF) Yamashita is a female magician, who promises us an evening of entertainment, where she will personally escort her audience “through the secret tunnels and nubiferous passageways of a post-colonialist, global economic maze, more hidden than King Solomon’s Tomb, more baffling than the riddle of the Sphinx and more impenetrable than the Great Pyramid of Khufu.”

In fact, her Assistant has run away, and the A-Mazing Yamashita is compelled to recruit volunteers from the audience for her classic acts of levitating a woman, sawing a woman in half, and causing a woman to vanish in a magic cabinet, the Cabinet of GATT (yes, as in “General Agreements on Tariff and Trade”).

In the course of her highly unorthodox magic, the Assistant returns via the Cabinet, to warn the audience that Yamashita is actually trafficking the women who volunteer for her magic acts. Yamashita, assuring the audience that this is all part of the act, produces a young Thai woman who has “chosen” to prostitute herself, illustrating the “magic” of GATT in generating market conditions that support the disappearing of women. Entering the Cabinet herself, Yamashita manages to convince the Stage Manager that there is no need for intervention. To reassure the audience, she calls on a Professor who responds to audience concerns with postmodern “deconstructions” of all their questions.

When her Assistant takes matters into her own hands, telephoning the police, Yamashita must disappear them all and then undertake the mass hypnosis of her entire audience. Explaining how the synaptic association of inequality with sexual arousal will eliminate any sense of discomfort about the evening, and, in fact, greatly enhance the audience’s ability to participate in the new global economy, Yamashita announces her intention to achieve this effect via displays of pornographic imagery. At this point, the Stage Manager pulls the electrical plug and the fate of the evening lies in the hands of the audience.

The real trick is to apply the lessons learned to the economic sleight-of-hand that globally erases women’s productivity, disappears over a hundred million women and girls a year, and commodifies the culture via increasing dissemination of pornography.