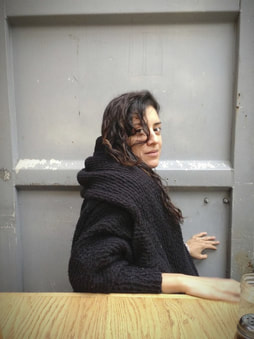 Janice Amaya as "Julietta" in El Bobo
A wealthy employer tells us he is going to conduct a little experiment with the Latina woman who cleans his home. He calls her into his office for an interview, during which, he makes increasingly absurd excuses for docking her pay. She responds with stoicism. Finally, he explodes... berating her for her failure to stand up for herself. He pays her the full wages, she thanks him and exits. The employer then turns to the audience to extemporize on his theme of what a "ninny" she was. Suddenly, the voice of Julietta is heard off-stage, threatening to shoot him. She orders him to put his head down on the desk and then put his wallet, cell phone, and watch on the desk. Then she orders him to say "Gracias." He complies, and she says,  "Just kidding. No gun..."  She then reprises his lecture on spinelessness, only in Spanish. She turns to leave, turns back and yells "Head down" and then exits laughing.  ... She exits, laughing:  "Que bobo!"