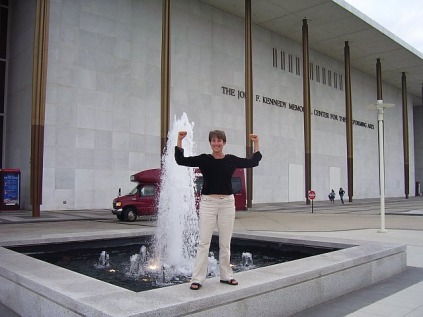 The Playwright at the Kennedy Center for the Venus Theatre reading
"Carolyn Gage’s The Spindle is a brilliant, courageous and important “adult retelling” of Sleeping Beauty, in which Beauty’s hundred-years’ sleep is her amnesia from incest. In reading it (in just reading it!), I saw what is not possible to convey by words alone. Like Harold Pinter’s The Homecoming, the disconnects we witness on stage (from maybe the words especially) shatter our hypnosis to not seeing what we've seen all our lives—the taboo, the never-put-into-words, the never-said. Sleeping Beauty/The Spindle is one of the fairy tales from which we must wake (it’s been a lot more than a hundred years). Gage is regularly hailed as one of the best lesbian playwrights in America, but I want to say—if she will allow this and I understand and accept if she won’t—simply one of our best playwrights.--Sharon Doubiago,My Father’s Love, Portrait of the Poet as a Young Girl; Love on the Streets, Selected and New Poems.

“This play is simply brilliant—in its construct, its characters and its dialogue.”--Sacramento Art and Entertainment Examiner.

"The story, the characters, and the dialogue are all powerful and radical in their truth-telling." -- Rain and Thunder, Northampton, MA.

A radical retelling of the fairy tale “Sleeping Beauty,” The Spindle exploits the conventions of children’s theatre to give adult audiences a child’s-eye-view of incest and its effects on the survivors.

The Princess Beauty has been kept from the knowledge of a curse which decrees she must be pricked by a spindle before her sixteenth birthday and fall asleep for a hundred years. She has been best friends from childhood with Doko, the cook’s helper in the palace kitchen, and the two girls have plans to renovate a gypsy wagon and travel about the kingdom with a puppet theatre after Beauty’s sixteenth birthday.

The plans are disrupted when Beauty’s godfather shows up unexpectedly at the birthday banquet with a “gift” which, according to the perpetrator, will empower her as an adult. The Queen, torn between a desire to protect her daughter and a need to neutralize her as a potential rival, reveals a family secret, which sets the stage for Beauty’s pricking.

Meanwhile, Doko’s three godmothers wrestle among themselves with their various strategies for dealing with the pricking curse. Betheen practices denial in the name of acting grownup; Andrea relies on her prowess in the martial arts to confront her fears; and the third godmother, Mary, surrounds herself with ritual and magical charms. It is Doko’s marionette (played by an actor) who alone knows the truth. She carries Doko’s traumatic memories of her childhood, and it is she who has witnessed the events on the night of Beauty’s sixteenth birthday. But the puppet is mute and can only communicate through acts of sabotage.

When Doko attempts to rouse Beauty from her spindle-induced trance, she becomes a target for a bewildering array of homophobic, morning-after behaviors, and the godmothers fare no better in their attempts to break through the Queen’s alcoholic narcissism.

The final showdown takes place in the perpetrator’s pornographic gallery, where the forces of good meet the forces of evil in an old-fashioned, knock-down-drag-out, chandelier-swinging, skull-cracking free-for-all. The moral of the story is that life is not a fairy tale, and the price of empowerment is coming out of denial, as Doko and her godmothers discover.

The juxtaposition of standard children’s theatre conventions in The Spindle with what is usually considered adult subject matter accentuates the archetypal horror that lies under the surface of so many “normal” childhoods.