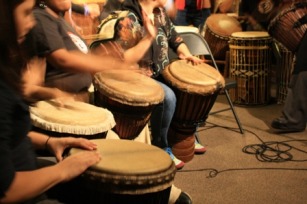 Young Women's Drumming Empowerment Project
This one-act for five women drummers explores the dramatic uses of the language of the drum.

In the play, the drum teacher Aisha has lost control of her class: One student is improvising with no attention to the directives from the teacher; another student who keeps losing her rhythm has voluntarily moved herself out of the circle; a third student has not even unpacked her drum.

Confronted with the lack of unity in the class, Aisha explains that the only way she knows how to teach is through the drum: It teaches her and it teaches through her. As tensions among the students escalate, one of the drummers breaks into chaotic drumming. At first, this is perceived as an act of aggression, but it quickly becomes evident that something more serious is happening. When the student fails to resond to attempts at verbal or physical intervention, Aisha tries to reach her via the drum.

Her initial attempts at “call-and-response” are rebuffed, but slowly the teacher manages to establish a dialogue with her runaway student. As Aisha “drums her down from the ledge,” the other students, chastened by this lesson in alternative language, rejoin the circle.