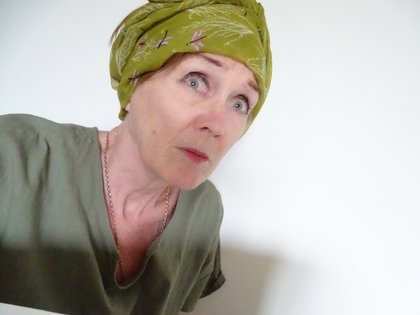 “One -person shows can get really stale or you can lose the thread and the purpose of them really easily, but Gage tells stories that are not only important but are interesting enough that you really only need one person to tell them. She easily incorporates humor into more somber material, and in this case, she takes someone with a huge secret that would be easy to demonize, and makes her a completely... accessible character who we feel for, even in the end.” --Lavendermagazine.com

"Carolyn Gage has a gift for illuminating remarkable women in history that others overlooked, misunderstood, or never knew existed, and telling their stories.  In Lace Curtain Irish, she convincingly embodies Bridget Sullivan, the former maid of Lizzie Borden's family, who has a shocking secret...and the audience must re-think everything they thought they knew about the story!  It led to an animated post-show discussion that continued into the next day."--Britta Reid.

"Lace Curtain Irish is a wonderful play to see during the Halloween season... gave me the shivers and I could have sworn I saw blood!"-- Audience member, Vermont.

"Carolyn Gage is a truly gifted playwright and actor.  Her performance of Lace Curtain Irish, at The Highlands Inn in Bethlehem, NH on October 31, 2015, was hypnotic and riveting and it left the entire audience wanting more.  Carolyn's plays and writings are at once intelligent, sensitive and entertaining.  She is a beacon in the lesbian community and her work is not to be missed." -- Gia, Innkeeper

[**Can be performed as the first act of a program of plays about Lizzie Borden. See AXED!]

Thirty-five years after the infamous Fall River ax murders, a 61-year-old Irish woman, working in her kitchen in Anaconda, Montana, opens a newspaper to read about the death of the alleged murderer, Lizzie Borden. The woman is Bridget Sullivan, the Borden’s former maid.

As she reads the article, Bridget shares with the audience her rage toward her former employer’s daughter, whom she believes attempted to frame her for the murders. She has been haunted by a recurring, mysterious dream that begins with lace curtains and believes she was a witness, but that she has blocked the memory.

Drinking heavily, she shares with us what she remembers of that fateful day: how, in spite of being sick with food poisoning on the hottest day of the year, Mrs. Borden had still ordered her to wash all the windows in the house.

As she speaks, Bridget is stretching lace curtains on blocking frames. The frames have small pins around the edges for attaching the lace, and Bridget, in her anger, keeps pricking her fingers and staining the margins with blood.

After the trial, Lizzie sent Bridget a substantial amount of money, with the condition that she leave the US and return permanently to Ireland. Bridget believes Lizzie must have seen her face at the window, and that the offer was an attempt to buy her silence. Bridget brags about returning under another name to Anaconda, Montana, a prosperous mining town run by Irish immigrants.

Declaring that Lizzie was a “tommy” (a lesbian), Bridget accuses her of courting her with kindness, in an attempt to set her up for the murders. Bridget’s childhood with fourteen siblings was a harsh one, and, wanting to escape her mother’s fate, she has emigrated with a dream of having an independent life.

Holding up a frame of lace, she is surprised by the sudden retrieval of a memory from the day of the murders. Approaching the parlor window, she did not witness the murder, but saw instead the reflection of her own face, resembling the face of her mother. This memory triggers a string of other memories that contradict her version of events for that day. Increasingly confused, Bridget begins to realize the true identity of the murderer and understand that the woman she has demonized for thirty-five years nearly sacrificed her life in order to save Bridget.

Press articles on the show.