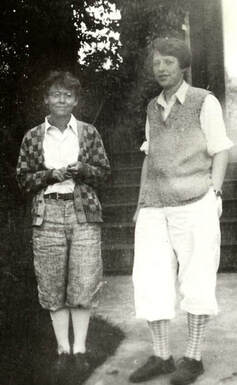 Barbara McClintock and Harriet Creighton in 1929
"As an autistic, gender non conforming lesbian, I’ve never felt represented in plays, writing or the arts. I was very happy to read this play as I was able to connect with the women’s stories. I also love the historical aspect to the play and engagement with a real woman who lived through a difficult time in history and defied the social and political norms, eventually receiving recognition in a male dominated profession."--Kat Johns

"Gage is expert at extracting fascinating lesbian history from oblivion. Here she brings a unrepentantly non-conforming--gender and otherwise--woman scientist to brilliant life and ties the genetics of corn to feminism, homophobia, patriarchy, and the mysteries of the universe. Gripping from beginning to end."--Tina Gianoulis

This play proves what I have often said about Carolyn Gage—She truly has a physicist’s sense of time as a fluid, with its own dynamic system of eddies and currents; bringing what matters together.—Louis Lopardi, Executive Director of All Out Arts (producer of Fresh Fruit Festival), NYC.


The entire play is set in a cornfield. The play is about gender-non-conforming, neurodivergent geneticist Barbara McClintock and her companion/partner Harriet Creighton, and McClintock’s revolutionary quest to understand diversity in nature and to reframe “deviance” as an expression of natural variance.

The cornfield—the land—is the constant. We see the two women driven from the fields of Cornell by discrimination and the Great Depression. We see McClintock returning from an aborted fellowship in Berlin in 1934, shattered by the horrors of rising Nazism and the co-opting of genetics for fascist theories of eugenics and propagation of a “master race.” Harriet joins the Women’s Army Corps in World War II, leaving Barbara in the cornfield of Cold Spring Harbor Laboratory, where monastic isolation is the price for her patch of corn.

In the 1950’s, her cornfield is literally and figuratively invaded by Jim Watson, the co-discoverer of the structure of DNA and proponent of the Central Dogma that was supposed to have cracked the code for understanding life. In this era of homophobic witch hunts and nuclear weaponry, McClintock’s work is considered obscure and obsolete. Finally, in her eighties, Barbara is working in her cornfield when Harriet comes to tell her that she has been awarded a Nobel prize for the work that was despised and ridiculed for decades. The major movements of the world have buffeted and washed over this woman who stood her ground—literally—for sixty years, planting her beloved corn year after year, entering its cellular world via the microscope, and teaching us that life is infinitely more adaptive, more complex, and more to be revered than our dogmatic and arrogant theories would allow.

This is a play about the physical land that women and minorities are and are not allowed to occupy, and the theories that justify displacement. It’s also about the metaphysics of “place,” the bodies we occupy, the cellular realities, and our relationship to nature—the final arbiter of whose land it will ultimately be.