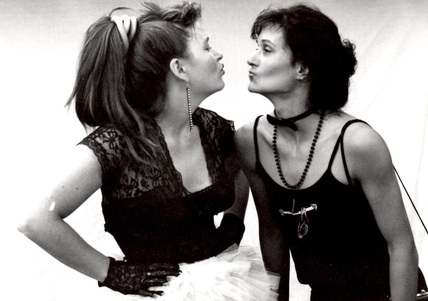 Invasion of the Ex-Girlfriends!
Book and Lyrics by Carolyn GageMusic and Arrangements by Sue Carney 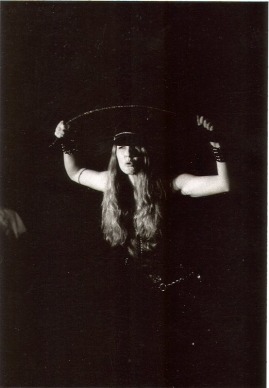 Akia Woods as the 'Dark Alley Dyke'
“… rollicking, fun piece that does touch on some serious issues… The audience was in stitches for most of the play and the rafters rang with applause.”--Santa Cruz Sentinel, CA.

“… delightful foot-tapping, arm-in-arm down the streets, sing-at-the-top-of-your-lungs stuff… The Amazon All-Stars is ours. It’s good, it’s fun… Lesbians need to see this show, to laugh and cry with it, to love it...” —Lee Lynch, lesbian author and nationally syndicated columnist.

“This is a sparkling, funny play...” --The Lithiagraph, Ashland, OR.

“… delightfully funny and sweet musical… With enlightening musical numbers by Sue Carney and humor abounding, [we] are drawn into the lives of these women as players and as people.” --Lambda Book Report, Washington, DC. 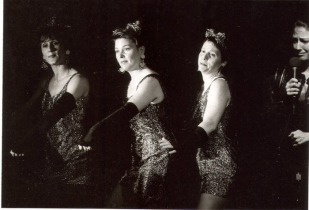 The Butchettes
The Amazon All-Stars is a zany musical comedy about a women’s softball team. Kelly, the left fielder, is truly “out in left field,” preferring her fantasies to reality. This makes for some great lesbian-style Walter Mitty scenes. When Jan, the new short stop, decides to test her sexual prowess with Kelly, both women are brought to a crisis about the way they see themselves and the world. Amid various subplots and subterfuges, team spirit triumphs, and everybody’s a winner. Who could resist “Come Out for the Team,” “When Women Do It to Each Other,” or “Ya Gotta Get Under the Glove”?

The Amazon All-Stars is written in the genre of the “naive musical” of the 1930’s, but it’s anything but simple! The nine members of the team are all fully developed with distinct personalities and motivations. Also, there are three subplots, all presenting aspects of denial in lesbian community and relationships: sorority politics in collectives, alcohol abuse, infidelity, and the mistaking of sex for intimacy.

The leads in the play, Jan and Kelly, are both ingenues, but their relationship touches on the deeper issue of exploitation of women who suffer syndromes from child sexual abuse. The secondary relationship of the play is between an older couple with an eight-year history. This relationship mirrors Jan and Kelly’s dilemma, but with more depth, adding resonance to the central plot.

The lesbian empowerment fantasies encompass several areas of our oppression and invisibility: sports, popular music, TV and film, and families of birth. And the use of the Leather Woman provides a “picture frame” device for the show, enhancing the theatricality of the work and allowing women’s communities to showcase a local band.

The three ball players who “triple up” for additional fantasy chorus roles, have parts written for them which allow them to play their own alter-egos in the fantasy numbers. For example, Ursula, the high school player, is the teenage bass player in the nightmare sequence. Later, in another fantasy, she is Mary Richland, a former high school friend who betrayed Kelly and turned straight. The audience experiences a consistency of character through these sequences, which adds coherence to the plot and helps anchor the fantasy scenes in the realities of the ball players.

The numbers are all highly recognizable parodies of specific types of popular music: the sleazy Stones rock-and-roll number, the fifties ballad, the “womyn’s music” take-off. The lyrics range from sophisticatedly cynical (“When Women Do It to Each Other”) to sublimely ridiculous (“Under the Glove”).

The Amazon All-Stars takes a lightweight tradition and sets dramatic precedent with a thoughtful and multidimensional treatment of lesbian community.