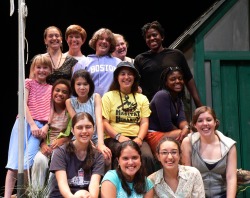 Hardy Girls Healthy Women Cast of Ugly Ducklings
The Abolition Plays: Head in the Game and The Intimacy Coordinator
Two plays on prostitution that, together, run for 50 minutes... allowing for a panel discussion or talk-back. Powerful social change plays advocating for the Nordic model approach.

The Anastasia Trials in the Court of Women
A play with intense audience participation! Engrossing, controversial courtroom drama, where the audience must serve as judge and jury, deciding motions and verdict, in a case against the five women who betrayed the Grand Duchess Anastasia Romanov, the last surviving daughter of the Tsar of Russia. Complex ethical questions on a set of folding chairs.

AXED!
An evening of theatre about alleged ax-murderess Lizzie Borden.

Black Star
In Black Star, the greatest African American classical actress of the 19th Century, Henrietta Vinton Davis, wrestles with a ghost who is calling into question her entire lifework.

Coming About
Gage's first full-length play. A play that examines the changes in marriage in a middle-class, white family.

Esther and Vashti
A romantic drama set against a backdrop of war in ancient Persia. A young Hebrew woman and her former lover, the Queen of Persia, struggle against their personal and political differences to form an alliance against a common enemy.

The Goddess Tour
It’s a dark and stormy night at a remote inn on the Burren of Western Ireland, as six American women -- strangers to each other (or are they?) -- gather for a tour of ancient goddess sites. A murder mystery exploring potentially deadly mother-daughter dyads, played out amid ghostly sightings of lost children and pre-Celtic rituals involving various aspects of the goddess.

In McClintock's Corn
The entire play is set in a cornfield. The play is about gender-non-conforming geneticist Barbara McClintock and her companion/partner Harriet Creighton, and McClintock’s revolutionary quest to understand diversity in nature and to reframe “deviance” as an expression of natural variance.

The Spindle
A children’s theatre play for adults! As thirteen-year old Doko struggles to rescue her best friend the Princess Beauty from the curse that says she will be pricked by a spindle before her sixteenth birthday, the adults in the play grapple with the denial and superstition that hold the kingdom in a tyrant’s thrall.

Stigmata
Stigmata dramatizes the rise and fall of 17th-century, Italian nun Benedetta Carlini, who becomes elected abbess on the strength of her miraculous  manifestation of the stigmata, and who is eventually tried by the Inquisition for perpetrating a hoax, as well as committing “peccatum mutum”--the so-called "silent sin" of homosexuality.

Thanatron
This is a rollicking farce about the world’s most dysfunctional family, a doctor with a penchant for assisted suicide, and a lesbian housekeeper with a crush on her employer. An over-the-top comedy about leaving, being left, and what it takes to stay.

Ugly Ducklings
Two counselors at a summer camp struggle with their love against a backdrop of homophobia. Scenes with the campers depict with chilling accuracy the cruelty of girls towards those they perceive as outsiders. Powerful lesbian drama! Nominated by American Theatre Critics Association for "best new play of the year" award!