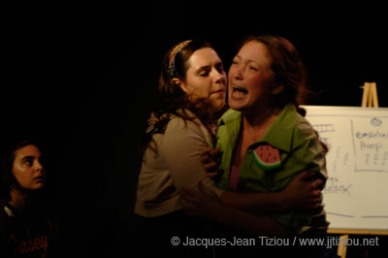 "It is one of those plays that will change you. It so eloquently and brutally shows the slide into condoning violence fueled by fear, loss and being told over and over that it is a societal norm necessary to survival. We performed it as part of a trio of plays about women in war almost ten years ago and it sold out every single show, even the nights where we had two shows. Like everything Carolyn writes it is unapologetic and shows how simple getting sucked into sanctioned violence against women and children can be, if you don't fight it every step of the way. Sadly, incredibly relevant now." -- Tamanya Garza, Producer/Director of the play for Philadelphia Fringe.

“To introduce the futility of a nation state and ethnic-based separation in such a simple and effective way is brilliant...”    --Laura Lampela, co-editor of Femspec, Vol. 5.

Five women, all mothers, have gathered in a classroom of their children’s middle school to take part in an experimental, new program designed to eliminate playground violence. Experts from international “think tanks” and peacekeeping forces are training the women on how to analyze playground dynamics in order to detect the class, ethnic, and racial inequalities among the children that are, in theory, the sources of conflict. On the chalkboard, there is a diagram of the playground, which has been divided up into “safety zones” in accordance with sophisticated formulas intended to balance out these inqualities. The program’s focus is emphatically on confronting social imbalances, not individual behaviors, and, to facilitate this focus, the women have been forbidden to look out the window at the playground. In fact, the blinds are shut.

As the women enter the classroom to wait for the trainer, they register varying degrees of discomfort and distrust. Evidently something traumatic has happened a week earlier, at the first session of the training, but, because of the injunction against focusing on individual behavior – and especially against “male-bashing,” they are reluctant to talk about it.

An enthusiastic newcomer joins the group, excited to have found a school for her daughter where the problem of violence is being so openly addressed. Her enthusiasm changes to confusion as she learns that the program prohibits any form of disciplining of the children, insisting that all conflict be resolved through the rules of the playground.

As the newcomer’s concerns escalate, the women’s self-censorship begins to break down, and it is revealed that, a week earlier, one child was shot on the playground and another was raped. The newcomer reacts with disbelief and then alarm, as the sounds of gunfire and screaming are heard from the playground. She is intercepted as she attempts to raise the blinds, and flees the room, accusing the other women of being insane. After she leaves, the mother of the raped girl begins to question the absence of a gender analysis amid all the sophisticated formulas for equality on the chalkboard. She calls for a division of the playground that would provide a safety zone for girls. This proposal is met with hysterical denial, and the play ends with the women whose losses have been the greatest joining forces to close the partially-opened blinds and to reinforce the attention to the rules of the playground.

This is a scathing social satire, along the lines of Shirley Jackson’s electrifying short story “The Lottery.” The Rules of the Playground demonstrates how the everyday social conditioning of women is exploited as a means of enabling the perpetuation of male violence. Women’s collective failure to identify war as an unacceptable expression of male aggression, and our acceptance of it along male-identified terms of “political expedience,” is depicted as nothing less than complicity—a complicity that renders us victims and betrayers.