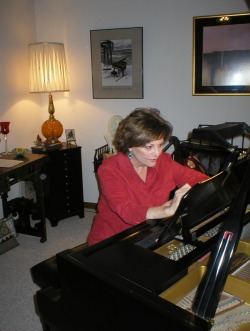 Sara, a young woman in her early 30’s, lies in a hospital bed, waiting to be taken down to surgery for a gastric bypass operation. Sara weighs more than 250 pounds, and she is convinced that, without the surgery, she will never be able to realize her ambition to become a professional opera singer. Her years of training and graduate school will have been wasted.

Sara’s partner, Gillian, is opposed to the surgery, and when she shows up in the hospital room, an argument ensues. Realizing that their conflict is causing Sara distress, Gillian apologizes and asks Sara to sing “Vissi d’arte,” a favorite aria by Puccini. When a nurse arrives to administer a sedative, however, Gillian renews her opposition and exits.

Under sedation, Sara experiences a series of dreams which incorporate elements of well-known operas with concerns about the impending surgery and her experiences with fat oppression. The dream sequences include a comic interlude as a Rheinemaiden, an encounter with the “Ghost of Callas Past,” a confrontation with a Met director who insists on a graphically realistic finale of La Traviata, a duet with Papageno, confusion between Madame Butterfly’s hari-kari and gastric bypass surgery, and a scene from Gluck’s Orfeo ed Euridice in which Gillian plays the tormented troubadour on a mission to retrieve his love from the Underworld—a mission which must be achieved without turning and looking back at her.

At this point, Sara wakes up, but she is still confused by the drugs. Mistaking Gillian for Orfeo, she insists that Gillian not look at her, because that is the only way to lead her out of hell. Gillian expresses a concern that perhaps Sara’s immersion in operas that reflect morbid male fantasies might be coloring Sara’s perceptions. She points out that what is making life hell for Sara is not the way she sees Sara, but the way other people see her. She challenges Sara to give a voice to her body, instead of trying to give a body to her voice.

Sara considers the suggestion and the play ends with her singing the aria, “This Body Is My Song,” a radical love song between a diva and her body.