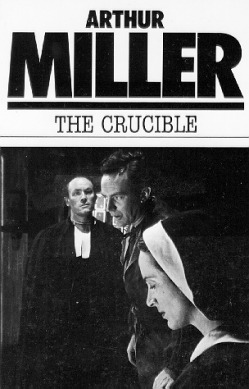 Published in Black Eye and Other Short Plays.

The Boundary Trial of John Proctor takes up where Arthur Miller’s Crucible leaves off. This play opens with Miller’s anti‑hero stumbling into the boundary lands where women’s lives are lived, a territory so marginal to patriarchy that it has eluded the awareness of both Proctor and his creator.

The women accused of witchcraft in Miller’s play are assembled in a sewing circle. We meet Elizabeth, Proctor’s pregnant wife, and Abigail, the employee he sexually exploited. We also meet Tituba, the formerly enslaved Carribean housekeeper; Sarah, the town baglady; Martha, the intellectual; and Rebecca, the town matriarch.

The women are assembled to make baby clothes for Elizabeth’s child. They ask John Proctor to join their circle and take up the knitting. Balking at “women’s work,” John discovers that he is unable to assert his male supremacist values in the Boundary of women’s existence. He is as marginal here as the women were in his world, and his discovery that witches are real results in an explosive verdict.