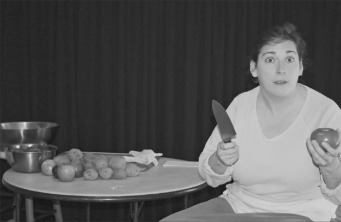 Cathy Plourde as Mary Mallon
“… blood-curdling, side-splitting… out of the mouths of full-blown characters who can mount a stage and own it.” --The Lesbian Review of Books, Altadena, CA.

Mary Mallon, dubbed “Typhoid Mary” by a hostile press, never admitted that she was a typhoid carrier. Her persistent refusal to defer to medical experts infuriated George Soper, a sanitation engineer for New York City. He built his career on tracking down Mary and incarcerating her. In this monologue, Mary speaks for herself. An Irish emigrant, she traces the story of her persecution back to the Potato Famine, all the while eyeing and chopping potatoes for the stew pot in the kitchen of the mysterious institution where she cooks.

Mary’s version of events is both humorous and chilling. She resists a theory of germs that would indict her for murder, when half of Ireland starved to death before the indifferent eyes of the world.