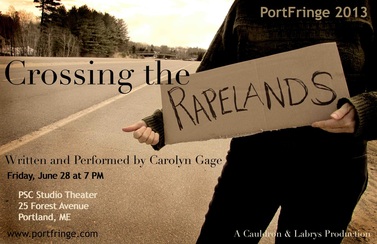 Crossing the Rapelands  premiered at PortFringe 2013. This is a travelogue along the lines of the work of Spalding Gray, about the playwright’s experiences of hitchhiking through America in the early 1970's—specifically about hitchhiking from Boulder to Los Angeles, to San Francisco and back with another woman in the summer of 1973. Gage incorporates the tales of other women crossing the "Rapelands" of the West: Sacajawea, Janis Joplin, Thelma and Louise, and the Women of the Oregon Trail.

" I’m calling this evening 'Crossing the Rapelands,' even though I was never actually raped crossing them. But I’m calling them that, because if you took out your GPS or your DeLorme atlas and you traced our route across Colorado, New Mexico, Arizona, Nevada, California, Utah, Wyoming and back to Colorado you wouldn’t really be tracing our journey. Now, maybe if this was a route taken by Jack Kerouac, or Woody Guthrie, or Jack London, or Gary Snyder, or Kilgore Trout, or one of those young men whose vagabonding laid the foundation for their later careers… you might. But me and Judy, we weren’t men. We were women. And when a young woman stands on the side of the road and sticks out her thumb, she automatically enters the Rapelands. And wherever she  may think she’s going, it’s always the Rapelands."