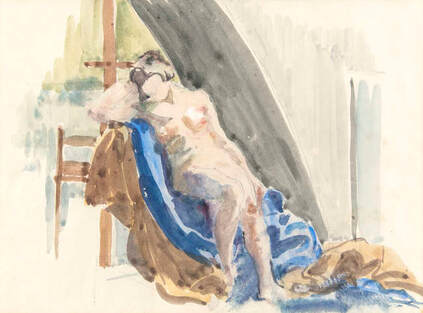 "... layered with loads of historical details and yet there is no whisper of a sense that we are being subjected to exposition. Instead, the high personal stakes that the characters are facing, and the way the story keeps unfolding with one moving revelation after another, carries us along in the need to know more about them and the era in which they lived. I cannot help but think that if there is some secret magic behind the genius of this play, it is simply that Female Nude Seated is infused with love...   As in all of [Gage's] plays, [she] shows us the healing power of women’s love for each other. This extraordinary play reminded me of why I love theatre. It deserves to be produced and seen widely."--Will Weigler, author of The Alchemy of Astonishment: Engaging the Power of Theatre

"You know in advance that Anything by Carolyn Gage is going to be interesting. It might even be genius.  Over the years I have come to know her work in many genres which were produced in our festivals. Consistently well-crafted, and more importantly, brimming with humanity and insight."--Louis Lopardi, Executive Director of All Out Arts (producer of Fresh Fruit Festival), NYC

"Enthusiastic applause to the brilliant Carolyn Gage on the occasion of her play, Female Nude Seated, receiving an outstanding zoom reading debut. I count myself so extremely lucky to call her a colleague, and would urge anyone seeking great art—and ESPECIALLY anyone seeking great plays that query and celebrate Lesbian Culture—to visit her immense body of work."—John Michael Sefel, director, dramaturg, editor, specializing in disability portrayal, Yiddish Theater in the US and commercial approaches to accessbility.

"This one-act script by Carolyn Gage and these two performances really reached me...in a way that was even more emotionally transparent and immediate than I could imagine being possible on stage… LOVED the play. LOVED the performances."- John Stoltenberg, American radical feminist activist, author, magazine editor, and theatre critic.

"Carolyn’s plays never have a word too many or a word too few. We learn almost all we ned to know about these women from the interaction between them. Even covering so much of what was going on in their time and place, none of it seemed a diversion from the relationship… packed with drama and love and mystery in one act. The characters and relationships in Carolyn’s plays always portray the truth in human nature."—Barbara Kahn, playwright and director.

"When a piece succeeds in [Zoom] format... it’s a cause for celebration, and Carolyn Gage’s one-act piece Female Nude Seated, decidedly deserves celebration…. Gage’s delicate exposition and lyrical writing parcel out the information and the development of the women’s relationship in a way that feels organic and natural, no small feat. The two actors appear in Zoom boxes side-by-side with plain backgrounds, yet under the direction of Emma Rosa Went, their interactions feel intimate and real… the combination of a sophisticated, beautifully realized script with outstanding actors who know exactly how to play to the limited camera of a laptop can, as with Female Nude Seated, may be all that is needed to deliver the kind of theater that’s a welcome stopgap until we can all be together again."-- Gay City News, NYC [reviewing Counterclaim Production Zoom performance.)

"For forty minutes, I was able to forget New York’s shelter-in-place order and the dim glow of my own apartment’s overhead lighting... The focus of Female Nude Seated is not the horror of the past nor the violent impositions men put on women and their creations, but the moment of transformation... the catalytic moment when the two receptacles —character and actor, canvas and frame, language and motion, past and future — merge and become one light."--Go Magazine, NYC

AUDIENCE FEEDBACK FROM MAY 16, 2020 Zoom reading by Counterclaim Productions:

"Powerful play! Outstanding and encouraging themes of creating a new family, resistance, risk-taking, caring for each other, and authentic, personal art."

"Devastating and intense and beautiful."

"Just need to say I would watch this a second time as it was so wonderful."

"The role that ignoring women has in 'raping the psyche'… very strongly portrayed in the play… refreshing to see that behavior called out."

"Your prose is poetry."

"So much clarity… this play was phenomenal.  [Gage is] decades ahead of the time. Thank you for your courage and honesty."

"The potential of this play as serving as a catalyst of conservatories and universities to address male mentorship abuse."

"I do really appreciate the massive amount of work, important work, behind this… many, many congratulations!!"

"I saw this the other night and was moved and impressed by the depth of the issues and emotions that lesbian playwright Carolyn Gage brought to this one-act play."

"What a privilege to enjoy your play tonight. I feel refreshed and inspired!"

"This was gorgeous!!! Thank you for putting this on and into my life. You’re a gaggle of Angels!"

"… full of history, revelations and the beginning of love."

"I watched this last night and was wowed by the play, performances, and production values. You manage to illuminate so many important issues, and entertain us as well... And I usually thoroughly dislike talkbacks, but am so glad I watched this one. I can truthfully say it was one of the two I have seen that I found worthwhile. The other one was Michael Moore on Broadway. Congratulations to all...!"

"… these actors found quick and subtle turns that set eddies of undercurrents swirling against expectations. Breathtaking!"

The play opens at midnight in a bedroom in a student rooming house, London, 1917. Mainie Jellet, 21, is having a nightmare. She wakes up screaming, turns the light on, and uncovers her easel to check the painting she has been working on. Still upset, she makes an attempt to drink a jar of paint thinner. Interrupted by fellow student Evie Hone, she spills the turpentine. The two women, both Dubliners, do not know each other.

Evie helps clean up the turpentine and brings a bottle of brandy. As the two women get to know each other, Mainie tells a horrific story of sexual harassment by one of her professors, who today is rumored to have been Jack the Ripper.

Mainie is in the middle of a serious identity crisis. Her year in London has opened her eyes to the truth about the “Great War,” and also about the Easter Rising. Raised in a Protestant, Unionist household, she learned to view Catholics as heathens, Irish rebels as traitors, and the war as a heroic defense of the glorious British Empire. Mainie is also beginning to question the traditional canon of male painters, and especially representational art, which she considers voyeuristic. Because of her radicalization, she feels she cannot go home.

Evie Hone, as an orphan and survivor of polio, has her own experience of losing home. She, too, is at a turning point and has made plans to enter a convent. Tempers flare and Evie challenges Mainie to paint her disabled body. Mainie, embracing the challenge, breaks through to a new form of artistic expression, one that emphasizing spiritual principle over outward appearance. Recognizing their need for each other, the two women agree to leave London and move to Paris together to seek out teachers who are breaking tradition. Instead of Evie entering a convent, the women decide to form their own community of women, women artists who share their values.