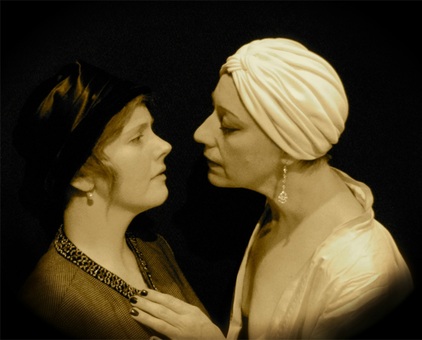 [Can be performed as the first act of a program of plays about Lizzie Borden. See AXED!]

A young, closeted reporter arrives at the dressing room of stage and film star Nance O'Neil. The year is 1930 and O'Neil is playing Irene Dunne's mother in the film Cimarron.

The reporter is aware of the rumors about Nance's lesbian affairs, and Nance is aware that the reporter is closeted. As the two women spar over issues of authenticity and reputation, Nance makes the intriguing proposal to give the reporter the story of "the greatest actress who ever lived" in exchange for the opportunity to interview the reporter about her life.

The reporter reveals the fact that she is divorced with a daughter, and Nance begins to tell the story of her affair with alleged ax-murderer Lizzie Borden. In the telling of this story, Nance claims to have discovered the identity of the real murderer, as well as the deception that Lizzie practiced throughout her life in order to protect this woman.

The women share a moment of intimacy before the reality of their respective lives claims their allegiance.

Press articles for the show.