Ain't Got No - I Got Life
A Monologue 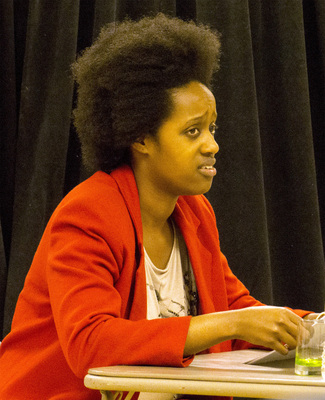 Gwira Kabirigi performs the Portland reading.
Ain’t Got No-I Got Life is a one-woman show about an older African American mother whose lesbian daughter has been unjustly imprisoned for defending herself against an assailant on the street. Tonia announces that she is having a party to celebrate her daughter’s upcoming release… a release that is going to come as a surprise and that she, Tonia, will engineer.

Tonia herself is a lesbian, and she shares with us the outrages that have been perpetrated against her and against her daughter.. both by criminals and by the criminal justice system that refuses to see them as human.

She pours a glass of whiskey, but each time she prepares to drink it, she remembers another aspect of the case to share. Finally, to get the party started, she puts on a Nina Simone song. The song lyrics reinforce her determination to free her daughter, and she downs the entire glass of whiskey. As she falls to the floor, we realize that she has intended to kill herself (she has a bleeding ulcer) in order to garner sympathy for her daughter at her upcoming hearing. Who cannot feel empathy for a young woman who has been unable to attend her own mother’s funeral?