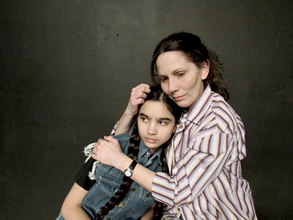 "... a thought-provoking and moving piece of theater."-- Snowlion Repertory Theatre, Portland, ME.

"Little Sister underscores the confounding intergenerational chain of violence, shame, and silence...  Gage allows her characters and their crisis no easy resolutions, giving equal and conflicting voice to Marie's loyalty to family, Theresa's to the law, and Jess's to radical imagination."--Portland Phoenix.

"...Trapped in violent familial dynamics and tribal traditions of secrecy, Jess finds a way to ease her pain through story and to rescue a youngster who may be Two-Spirited. With seamless circular plotting... a tense drama about a family of women in an isolated American community."-- Filmmaker Catherine Crouch


A tribal police officer struggles with her lesbian partner over issues of loyalty and definitions of “family."

The play opens with an argument between Theresa, who has just had to arrest her brother-in-law, and Jess, who is engaged in creating a graphic novel about the Chiricahua warrior Lozen. Theresa raises a number of concerns about assimilation into white culture, as well as questions about the accuracy of oral histories taken down by white historians.

Jess, who has a trauma history, experiences ongoing PTSD, which becomes an issue when Onawah arrives unexpectedly in the middle of the night. Jess, startled, responds with a display of violence that terrifies Onawah. When Theresa attempts to explain about PTSD, Onawah becomes even more disturbed, for reasons of her own. Later, in the night, Onawah overdoses on Jess’ meds and is taken to a hospital. 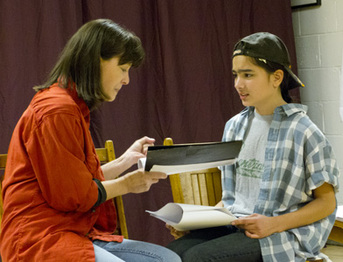 Laura Graham and Angela Moline in Snowlion reading
At the hospital, it is revealed that the girl has been a victim of sexual abuse. When suspicion falls on Onawah’s stepfather, her family responds with denial and counter-accusations, and Jess finds herself needing to confront some of her worst demons in order to show up for Onawah.

An episode from Jess’ graphic novel about Lozen provides the key that unlocks the healing for the child, as well as for Jess. The play ends on a note of hope rooted in a fierce history of resistance in a culture that considered Two Spirit people sacred and the well-being of the child a tribal priority.