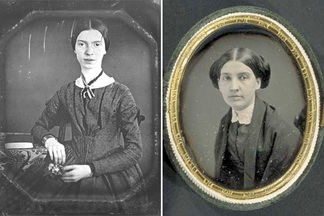 Emily was always a puzzle to me, a canny prophetess of words. I had felt the agony in her poetry, that deep grain of wryness and cynicism that only comes with pain unendurable. But from where did it come?

I do not pretend to be a scholar of Emily Dickinson, nor do I pretend to having read her entire oeuvre. In fact, prior to meeting Carolyn Gage, I had not understood that Emily was beset upon from all sides by the world, by her family, and, indeed, by her own body. I had not known that Emily most likely suffered from epilepsy, which, if you were unaware, is like sticking your fingers in an electrical socket until you pass out, shit yourself, and writhe on the ground until it passes. I also had not known that Emily harboured a deep, passionate love for a woman who, though living in close proximity, was completely out of reach, and floated further away with every year that passed - even though, due to the society of the time, drew inexorably closer and closer. It was in this paradoxical clime that Emily existed, according to these new revelations, these uncensored letters. Even in death, Emily was bowdlerized, posthumously shamed, until a century later. In this new age of opened eyes and opening hearts, we have fragments of a history which has been laid bare to us. Pronouns once altered to suit another's wish are righted, like old ships, refinished and reconstructed, gleaming with sails unfurled in the sun. Whole lines have been replanked, letters unearthed from chests.

And so, our play is adapted from Emily's own words - both new and old. Though it shows how, again and again, Emily is denied, I would like to think that it is more about the strength it takes to survive. The strength to withstand oceans which seek to drown; about existing so singularly that you feel doubled over; and, above all, it is about passion - that great invisible hand which clenches, fist-like sometimes, and strokes with its palm during others. It is about love, that flickering light which the eye seeks to find, even in times of near-complete darkness.

Let Emily tell you her story, let her speak to you herself, after you have seen this show. Seek her out in your own way, after you've seen our production. What you see is not meant to tell the whole story, it is meant to invite, and it is meant to challenge. We have incorporated multi-media to help portray the agonies Emily endured, to act as a complement and to immerse the audience in a semblance of the chaos she felt. Take from it what you will; remembering, of course, that history is often told by those who seek to describe their own victories, or to annul another's for invidious reasons. Look at everything from all sides, or as many as are available, and do not allow yourself to fall prey to falsehoods for the sake of convenience. Let Emily tell you with her true mouth and with her true voice, and let her words - the one thing she could rely upon, the one thing she could use as any sort of valve - pierce through the tattered and filmy veil of time, to your ear, and to the open minds & hearts of our age. I am hopeful that, wherever her Soul resides, it is breathing relief after too, too long a time.