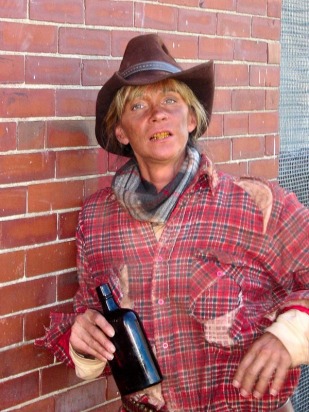 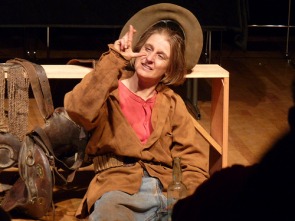 "Calamity Jane Delivers A Message to Her Daughter was one of the best acting performances of this [Dublin International Gay Theatre] Festival. Carolyn Gage was mesmeric as the aging infamous female cowboy recalling happier times. Both writing and performance were of the highest standards and it was a riveting piece of comic theatre… you could almost smell the booze!” --Gordon Farrell, Queer ID, Dublin.

This work is based on the real Calamity Jane. Vulgar, debauched, and raunchy, Jane is considered a freak by women and a laughing stock by men. Without the strictures of compulsory heterosexuality, she might have had the freedom to live the life of a roughrider without having to pass as a man. She might have been given the place in history which was accorded to her sidekick, James Butler Hickok. And she might have found a way to satisfy her frustrated desire for acceptance by women.

Jane is a butch woman who had the misfortune to be born in an era before lesbian culture. She is a feisty woman with a keen sense of humor, who has kept herself going with a number of destructive myths which are familiar to all of us.