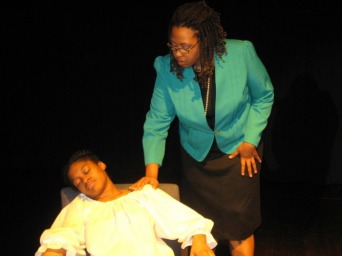 Harriet Tubman Visits A Therapist, Bennett College
Ain't Got No-I Got Life is a one-woman show about an older African American mother whose lesbian daughter has been unjustly imprisoned for defending herself against an assailant on the street.

The A-Mazing Yamashita and the Millennial Goldiggers
“The transnational, postmodern magic show of the millennium!” The A-Mazing Yamashita promises to levitate a woman, cut a woman in two, and disappear a hundred thousand women—all through the wizardry of modern pharmaceuticals, the presto-chango of sexual com-modification, and the wonders of the Great Cabinet of GATT.

Artemisia and Hildegard
Two of the most powerful women artists in history discuss their work on an explosive arts panel about survival strategies for women artists.

Battered on Broadway
Farcical romp that takes a backwards look at the misogyny of Broadway’s musicals through the eyes of the characters themselves... decades later!

Bite My Thumb
A “skirmish in one-act.” Two “gangs” from contemporary rival productions of Romeo and Juliet meet in an Off-Off Broadway alley to rumble, sixteenth-century style. Lots of cross-dressed knee-flexing and gender-bending!

Black Eye
Subtitled “a knockout in nine minutes,” this short play packs a punch. The year is 1953, and Amanda is a 13-year-old tomboy who has been sent to the principal’s office for fighting the boys who have been lesbian-baiting her. When the principal, who is in the closet, moves to expel her, Amanda’s lesbian P.E. teacher shows that she is just as willing to fight as her student. A taut play, filled with surprises.

The Boundary Trial of John Proctor
A one‑act featuring the notorious anti‑hero of Arthur Miller’s Crucible, and the women he exploited. John Proctor, finding himself in the boundary lands of patriarchy after his execution, encounters a second trial—this time by the women. Proctor, who does not believe in witches, scrambles desperately for context as he is tested by his ex-wife, his mistress, a formerly enslaved Caribbean woman, the town baglady, the town bluestocking, and the town matriarch.

Cookin’ With Typhoid Mary
Half-hour dramatic monologue by the notorious typhoid carrier who refused to admit the existence of germs. Her side of the story.

The Countess and the Lesbians
Three lesbian actors are rehearsing an historical play about Countess Markiewicz and the aftermath of her participation in the Easter Week Rising in Dublin. The play is about her political differences with her sister, who was a pacifist. As the women take up the issues of the play, the power dynamics of their own lesbian relationships are called into question.

The Drum Lesson
A one-act for five women drummers, in which much of the dialogue is conveyed via the drumming.

Easter Sunday
The year is 1960. The park is Morningside. The day is Easter. A play about love and drinking, and class differences between lesbians. It's a story about Marty Mann, the founder of the National Council of Alcoholism, and her secret relaspse. A story of redemption.

Entr’acte or The Night Eva Le Gallienne Was Raped
Eva Le Gallienne has checked herself into a private hospital the night she was raped backstage during her Broadway run of Liliom. She has sent for her former girlfriend Mimsey, whom she has not seen since Mimsey’s marriage ten months earlier. A tour-de-force for a young actor, running a gamut of dissociative states of a survivor of sexual abuse.

The Evil That Men Do: The Story of Thalidomide
Fast-paced radio drama, suitable for stage production. The conspiracy of the German drug manufacturers and the FDA unfolds like a murder mystery, as Dr. Frances Kelsey, suspecting birth defects, stalls for time against mounting pressures to license sale of “the sleeping pill of the century.”

Female Nude Seated
Two Irish art students meet in a student rooming house in London, late one night in 1917. Both of them are at dramatic turning points in their lives and on the brink of making disastrous choices. Will they rescue each other in time?

The Gage and Mr. Comstock
A monologue by feminist foremother and Suffragist, Matilda Joslyn Gage, in which she sets the bait for Anthony Comstock to ban her book, Woman, Church and State, a comprehensive exposé of the historical misogyny of the christian church.

The Great Fire
Two sisters and their brother wait for rescue by boat on the beach of Bar Harbor, as the Great Fire of 1947 destroys the entire town. The former chambermaid provides a key to escape from the apocalyptic scenario. A ten-minute play.

The Greatest Actress Who Ever Lived
A closeted reporter arrives in the dressing room of veteran, bisexual stage and film star Nance O'Neil, and as Nance shares the details of her affair with alleged ax murderess Lizzie Borden, the two women share a moment of intimacy.

Harriet Tubman Visits A Therapist
Harriet Tubman, suspected of planning an escape, has been sent to the therapist, another African-American woman, for an evaluation. Radical activism meets one-day-at-a-time therapism. Published by Samuel French, presented at Louisville Juneteenth Festival, winner of Off-Off Broadway Festival.

Head in the Game
A persuasive case for abolishing prostitution. In the Boxing Girl Gym, the clients pay by the hour to "work out" with "sparring partners." The "sparring partners" paid to let the client win, which means they don't punch back. Perfectly legal variation of a popular recreation... no?

Hermeneutic Circlejerk
A farcical satire on the founding of postmodernism by two philosophers with a public history of pro-pedophilia activism... a deconstruction of the deconstructionists!

Heterosexuals Anonymous
A playful send-up of the 12-step movement. Five women in recovery from their addictions to men, convene at their weekly meeting. The format includes personal testimonies and the reading of the 12 Steps of HA.

Jane Addams and the Devil Baby
Hull House, rumored to be sheltering a “devil baby,” is besieged by emigrants clamoring to see the child with horns and hooves. Jane Addams locks horns with an elderly Irish woman, in an attempt to understand the strange obsession that has gripped Chicago.

A Labor Play
Kafka-esque one-act about a multi-national corporation in the business of selling babies. “Business as usual” comes to a halt when one of the workers strikes for control of the distribution of manufactured goods. In other words, she wants to keep the baby.

The Ladies’ Room
A five-minute play about two lesbian teenagers in a ladies' room at a shopping mall. The butch has just been mistaken for a man, and mall security is on the way. Her girlfriend, because of her own history,is conflicted about offering support.

Lighting Martha
A one-act about the lesbian relationship between legendary lighting designer Jean Rosenthal and her assistant Miki (Marion) Kinsella. The play opens in April 1969, after the final dress rehearsal for Martha Graham’s 35th season opener at the City Center. Legendary lighting designer Jean Rosenthal, dying of cancer, arrived in an ambulance and on a gurney for the final lighting check. The play is a reflection on denial and dying, intimacy and artists, seeing and being seen, and—of course—on light.

Little Sister
A tribal police officer struggles with her lesbian partner over issues of loyalty and definitions of "family."

Louisa May Incest
The writing of Little Women is interrupted when the character Jo March and her famous creator cannot agree on the ending. The struggle for control of the book becomes deadly when Jo accuses Louisa of repressed lesbian desires and incest memories.

Mason-Dixon
Separated for thirty years, a white woman attempts to recruit her former slave to return to the South to work as a Union spy in the Confederate White House. Issues of race, class, and gender explode as the women confront their lesbian girlhood and shared history of sexual abuse.

The Obligatory Scene
Ostensibly arguing about The Taming of the Shrew, a lesbian couple come to grips with their own marital struggles around the issue of sex.

The P.E. Teacher
A one-act about misogyny, racism, and homophobia in the schools. A new teacher is hired to replace a lesbian teacher who resigned under suspicious circumstances. When a former lover turns up on staff, it becomes evident that the scapegoating is a cover for the school’s institutionalized violence against women and girls.

The Parmachene Belle
“Fly Rod” Crosby, a lesbian Maine hunting guide from the late 19th century, shares secrets about fly-fishing as she indulges in her romantic fantasies about her friend Annie Oakley.

Patricide: A Play in One Minute
A one‑minute monologue by a woman of any age, ethnicity, race, orientation, physical ability, class background—in which she telephones and confronts her father on incest.

The Pele Chant
A ninety-two-year-old Native Hawaiian woman struggles with the last request of her adoptive mother, Queen Liliuokalani, the last queen of Hawai’i. Succeeding in her quest, she overturns the paradigm of Western history, exposing its inherently colonial agenda.

Planchette
During a nor'easter on the New Hampshire coast, in 1879, two fourteen-year-olds share their secrets about trauma they have survived and the deeper secrets about their sexual orientations and gender identities.

The Poorly-Written Play Festival
Just possibly the worst one-act play ever written! A committee of play readers meet in the Green Room to select the plays for a Festival of Poorly-Written Plays. In the course of the meeting, they violate every tenet of good playwriting in a kind of “Actor’s Nightmare” for playwrights. Riotously funny.

Radicals
A one-act about the women in the anti-war movement of the Sixties. Sexual tensions fuse with political agendas, as the women cross minefields of repressed emotion, and the action builds to a violent climax, as the war comes home.

The Rules of the Playground
Six mothers of middle-school children come together for a special training on playground violence. Focusing on perfecting the rules of the playground to eliminate inequality, the women, literally, turn a blind eye to the real cause of violence. A chilling interrogation into the ways women teach each other to enable male violence.

St. Frances and the Fallen Angels
The ghosts of two survivors of the Triangle Shirtwaist fire come to haunt Frances Perkins, who is on the verge of resigning her position as Secretary of Labor in the Roosevelt Cabinet.

Souvenirs from Eden
The ghost of lesbian poet Renée Vivien returns to a pivotal memory from the summer of 1900, when she was in Bar Harbor (“Eden”), Maine, with her lover Natalie Barney. She wrestles with scenarios of traumatic memories in an attempt to find closure.

Starpattern
A play about two extraordinarily courageous young women who survived the 1966 mass shooting on the University of Texas at Austin. Claire Wilson, one of the first victims, lay wounded on the South Mall, unable to be rescued while the sniper was still active. Rita Starpattern ran out, at tremendous risk, lay down next to her, and engaged her in a conversation that kept her conscious and alive for over an hour.

‘Til the Fat Lady Sings
A play with music for two women in one-act. A fat woman in her 20’s is in the hospital awaiting surgery for a gastric bypass operation she believes necessary for her dream of singing opera professionally. Her partner is against the surgery, and as the patient goes under sedation, she finds herself and her partner in a series of bizarre dreams where her situation incorporates elements of operas by Wagner, Gluck, Verdi, Mozart, and Puccini.

Valerie Solanas At Matteawan
Two activists visit the notorious lesbian who shot Andy Warhol during her incarceration at the Matteawan State Hospital for the Criminally Insane. They want to recruit her as a spokeswoman, but Valerie has other ideas.