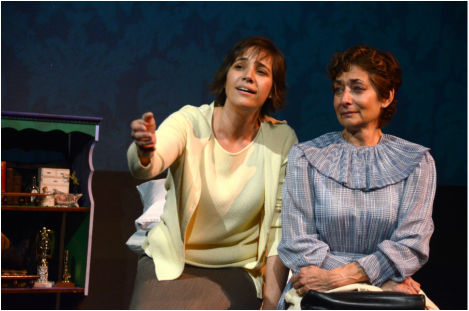 Video Clips of Minneapolis concert/reading with Ellis and Theatre Unbound. 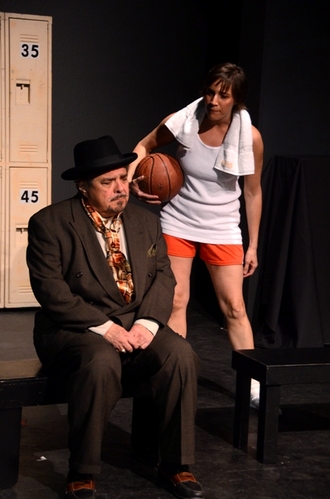 Babe with the Recruiter
“Jill Higgins’s music, with Gage’s lyrics, fulfills musical theater’s aim of driving the plot while having real substance. This very entertaining play has humor, drama, and a wonderful lesbian love story built around the larger-than-life (and very American) character of Babe Didrikson. Girls who love sports and women of all ages who aspire to greatness will be inspired. Taking the risk to focus on a butch lesbian woman, Carolyn Gage has given us all a gift of female courage and tenacity…” --Twin Cities Daily Planet, MN.

Babe! is a musical about winning... winning so big you bring all your competitors along with you to rewrite the rules of the game!

In 1929, the world of professional sports belonged to men.  and a truckdriver's daughter from Beaumont, Texas, with the dream of becoming the greatest woman athlete in the world was going to have to prove herself... over and over again. The show opens with legendary sportswriter Grantland Rice narrating a brief history of these prejudices in "Proclamation for Women Athletes," and the curtain rises on Babe's bedroom in Beaumont.

Mildred "Babe" Didrikson has just won a spot on the Beaumont High football team as a place kicker. She celebrates with an exuberantly athletic rendition of her theme song, "Winnin'." Her victory is short-lived, and at the Winter Carnival Dance, she discovers that the principal has overruled her coach, and that the only arena for women's competition is the beauty competition.  The contestents for the Miss Carnival Queen school their classmate about the proper roles for women in their pageant-walking extravaganza "The Girls Who Walk the Fine Line." 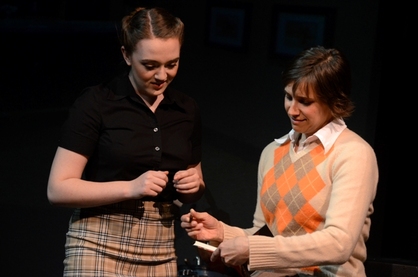 Babe signs an autograph for the woman who will become her partner.
As the balloons rise and the lights fade on the converted basketball court, Babe encounters a recruiter from a Dallas insurance company that sponsors a women's basketball team. Unaware of his mission, Babe vents her frustration over the rules for girls and asserts her right to challenge them in her solo "Watch Me Fly!"

From Dallas, Babe quickly draws national attention to herself, landing an invitation to the  track-and-field tryouts for the 1932 Olympics. A chorus of male reporters enthuse over her special status as a "one-woman team," which allows her to try out for ten different events. The Olympic contenders are taken directly from the tryouts in Illinois  to Los Angeles on a special all-night train, where the young athletes burst out of their sleeping compartments to confront Babe's harmonica playing. The first act ends with the girls enacting their revenge on an infuriated Babe. 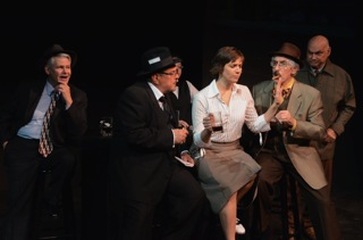 Babe with the Reporters
The second act opens at the 1932 Olympics with the explosive chorus number of athletes in "Olympic Gold."  The hurdles event is announced, and Babe ostensibly wins. Down on the field, the women on her team are aware that she cheated, and they confront Babe. Babe responds with a reprise of "Winnin'" and the loser sings a heartbreaking ballad, "No Next Tme."

Babe's victories continue to mount, as she arrives home in a brand new Dodge roadster. She and her sister sing a duet about Babe's "downtown engine with an uptown chassis," before Babe begins to open her fan letters. Among them is a notification from the Amateur Athletic Union of the revoking of her amateur status, dashing her hopes for a future Olympics and ending her career with the insurance company.

At the all-male New York Press club, the reporters are discussing this change in Babe's fortunes, and the conflict between Grantland and Gallico erupts again... this time into a huge production number with graceful male waiters and macho male reporters singing, "The Six Beautiful Sports for Girls." 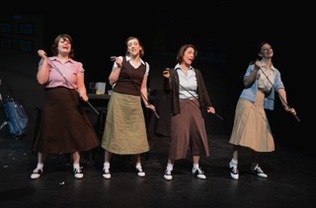 The Country Club Women
Meanwhile Babe, trading on her Olympic glory, has managed a lucrative vaudeville contract and returns home with an expensive gift for her immigrant mother... a trip back to Norway. The trip, a symbol of her mother's girlhood, is roundly rejected, and Babe pleads for her acceptance in the ballad "I Wanted to Give You Norway."

Following this rejection, Babe resolves to reenter the world of sports as an amateur golfer. This is a sport that requires membership in a country club, as the class-conscious golfers remind her in their vicious tango, "You Have to Have a Club." After winning her first tournament, Babe finds herself again banned as an amateur athlete, becoming the only female pro golfer.

Her fortunes begin to change at the Western Open, where she meets Betty Dodd, who will become her partner. At the driving range, they sing the romantic duet, "I Never Knew."

Back in Beaumont, Babe's mother is dying, and Babe arrives just in time for the funeral. As she and her sister share their pain over the mother's death, they make a discovery that unlocks the secret to their mother's past and her lifelong antipathy for Babe's athletic career. They sing a healing reprise of "I Wanted to Give You Norway."

The final scene of the play is a meeting of women golfers in New York, as they struggle to organize the first women's professional athletic organization, the LPGA. Babe enters with Betty, offering to leverage significant financial sponsorship for them and tendering an apology with "It Took Me A Long Time." The athletes take up the chorus of reconciliation, as the male reporters enter. Grantland interrupts the song with his dateline for the historic moment, and they all join for a final chorus. 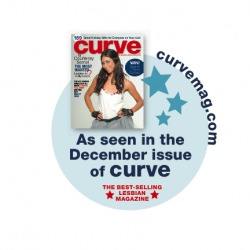