The Last Reading of Charlotte Cushman 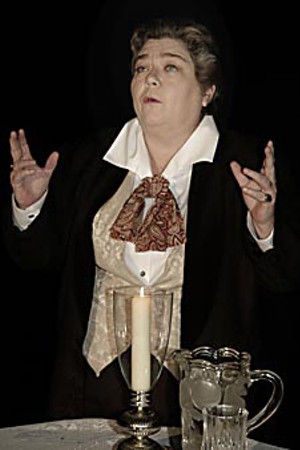 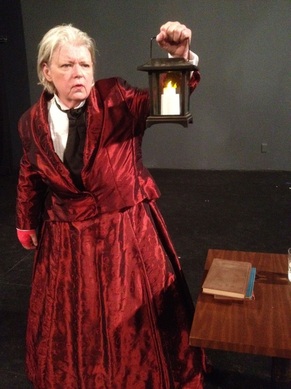 "I almost never review something that a viewer can't see – such a show that's played only a few performances and closed. There are exceptions, however... Last week, at the Marigny Theater, I saw a one-woman show, The Last Reading of Charlotte Cushman, that is simply extraordinary and if there's any justice, it will return there or somewhere else... Karen Shields gives a beautifully modulated performance: moving, poignant, terribly theatrical and funny as hell...superbly structured, a showcase for a strong, dynamic actress..."-- David Cuthbert, WYES-TV, (PBS affiliate), New Orleans.

“… nearly flawless in its appeal and execution… [Gage’s] Charlotte brought an appetite to the audience they didn’t even know they had… the audience reluctantly left the theatre...” --The Slant, Marin County, CA.

(About Shields production) "To see this woman on stage...I can't even describe it. She has comedic timing that serves the writer's levity in a way that can only be experienced first-hand. And, when she steps into the classical monologues, the earth shifts a little. Her drama pulls up tears from the gut. It's incredible. Especially in the immersion theatre environ." -- Deb Randall, Venus Theatre, MD.

Deb Wright as Charlotte Cushman
The Last Reading of Charlotte Cushman is a moving one-woman show about the greatest American actress of the nineteenth century. Charlotte Cushman, a large butch woman, was very “out” about her lesbianism, cross-dressing to play men’s roles and referring to her partner as “my wife.”

The play opens with an announcement that the performance will be canceled, but Charlotte, outraged that such a decision has been made without consulting her, charges on to countermand the order. Cushman, struggling desperately against breast cancer, insists on performing—and, taking up the challenge of her condition, devotes the evening to the subject of death in the theatre. Having played many roles which require dying, Charlotte regales the audience with moving—and sometimes hilarious—scenes from Macbeth, Hamlet, Oliver Twist, A Midsummer Night’s Dream, Henry VIII, and the notoriously bad melodrama, Guy Mannering.

Interspersed with her monologues are anecdotes about other actors, her family, and about the romantic intrigues of the lesbian community of American emigrees who were living in Rome in the mid-1800’s. This community included Harriet Hosmer and Emma Stebbins, both sculptors of international reputation.

At the opening of the second act, Charlotte shares with us an unusual bet she has made with her lover, who is watching from the wings. Later, as she performs her most famous “breeches part,” the role of Romeo, the play takes a surprising turn to reveal the woman behind the mask.

The Last Reading of Charlotte Cushman is a treat for lesbians, for women’s history students, for theatre history buffs, and for fans of Shakespeare! But it is Charlotte Cushman’s profoundly human struggle against a terminal illness which makes the play an unforgettable experience.


"Backstage on the Bayou" Interview with Actor Karen Shields

"The Last Reading of Charlotte Cushman", reviewed by Dalt Wonk for The Best of New Orleans.com, Feb. 1, 2010.

"Voices Made Flesh reviewed by Tanis Macdonald, in Canadian Literature: A Quarterly of Criticism and Review, Vol. 186, Autumn, 2005.