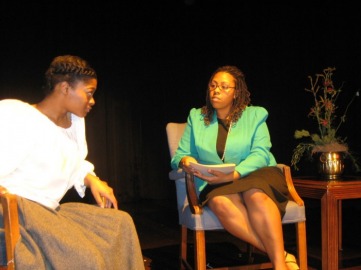 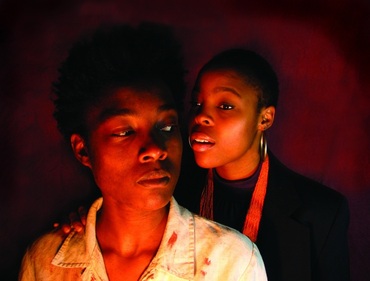 Lucid Stage Production, Maine
"… marked with originality and cleverness as well as thoughtfulness in both conception and execution... In a time in our society when slavery and its sustaining effects are never acknowledged and outright denied, it is good to read a contemporary version of the classic freedom fighter— Harriet Tubman.” --Aishah Rahman, playwright and Associate Professor in Brown  University’s Creative Writing Program.

“The discussion [following the play]… lasted well over an hour, a record for such events at the theatre.”--Vanessa Gilbert, Perishable Theatre, Providence, RI.

“The play has the power of anger.” --The Providence Journal, RI.

"... highlights a unique disconnect between the two slave women, a schism in the psychological approach to dealing with the emotional effects of slavery. Where Tubman will not tolerate it at all, going so far as to risk her life and sympathize with women who have killed their children rather than see them sold, the slave therapist tries to make the best of her situation.  "Focus on what you can change," is a tag line of the therapist, issuing a modern self-help maxim that sounds patently ridiculous the moment [the Therapist]  utters it. Still, [the Therapist's] character typifies one particular psychological stance for dealing with oppression — do what it takes to survive — while Tubman holds to the integrity of her African foremothers in a fit of unyielding spiritual poetry that is uplifting and lyrically profound."-- Kentucky.com

“… a satirical, funny and yet poignant and serious look at the abuse black women took in those days, with some interesting comparisons to today.” --The Warwick Beacon, RI.

“Arthur’s performance [as Tubman] was so powerful and raw that the audience literally could not stop cheering and clapping at the end.” --Our Weekly.Com, Los Angeles.

"... the distillation and the lyric intensity of poetry."-- Portland Phoenix.

“Playwright-editors Lane and Shengold have assembled five full-length plays, 11 shorter plays, and excerpts from four plays, all written for actors under 30… Jessica Goldberg’s Refuge, Jenny Lyn Bader’s None of the Above, and Carolyn Gage’s Harriet Tubman Visits a Therapist are all standouts… fresh and gripping…” --Library Journal, reviewing Under Thirty: Plays for a New Generation (Vintage)

"The script has the distillation and the lyric intensity of poetry. Harriet’s rejoinders to the therapist jump between sullen, enraged, and reelingly comedic..." -- Megan Grumbling, The Portland Phoenix, ME.

"Harriet Tubman taps into that push and pull between women of color, the outside forces that oppress us, and our internal struggle with how best to save ourselves- should we fight for individual gains? resistance? transformation? The play’s ending is empowering. It concludes not with the death but the triumph of women’s resistance, a real, historical event that made more ripples on the sea of Black women’s lives than Harriet Tubman might have dreamed of- and it was her willingness to let her dreams carry her away that made triumph possible. The immediate and long-held standing ovation was testament to the play's incredible uplift." -- Selina Gallo 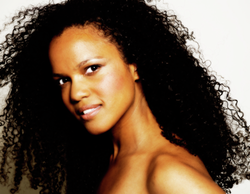 B'dway's Kari Nicolle, 2010 NYC reading
Harriet Tubman Visits a Therapist is a gripping confrontation between two women who share the same oppression, but whose definitions of survival are in direct conflict.

Harriet Tubman, suspected of planning an escape on the Underground Railroad, has been sent to the Therapist for an evaluation. The Therapist, another African American woman, warns Harriet about the dangers of radical action. Harriet accuses the Therapist of colluding with the enemy in the guise of practicing therapeutic intervention.

As the Therapist attempts to convince Harriet of the benefits of accepting the things she cannot change and learning to live one day at a time, Harriet uncovers the Therapist’s secret - a secret which will give her access to the information she needs.

The plot takes a sudden twist during one of Harriet’s spells of sleeping sickness, and in resisting the suggestions which justify the Therapist’s ideology, Harriet discovers a source of spiritual support rooted in her own activism.