Women on the Land
Music not available at this time. 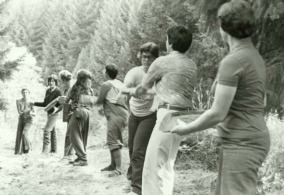 Women on the Land
Women on the Land contrasts the world of the Los Angeles film studio with the rural environment of a lesbian land collective in southern Oregon, and points up the choices lesbian artists are forced to make between selling our art and protecting our vision. The show also provides a retrospective of lesbian culture in the early 70’s, with the attendant witch hunts and “political correctness” wars.

The second act opens at Herland, in the middle of a severe drought. Tempers flair and cultural and ideological sparks fly as the Los Angeles leather scene invades the kingdom of Oregon country dykes. Magic is abroad on the night of Hallowmas, and the women discover in themselves the common lesbian values that have been lost in both worlds.

This musical has something for everyone: The opening rock video number from the infamous “Lesbian Vampires From Hell,” the sexual auction at the notorious Ladyfingers Bar, the potluck-western dance “Country Dish,” and playful “Denim and Flannel Rag.”