Two Volumes of Monologues and Scenes for Lesbian Actors! 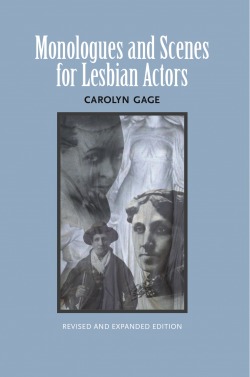 “No playwright has created as amazing a pantheon of historical lesbian characters as Carolyn Gage. Her book, Monologues and Scenes for Lesbian Actors, provides a sumptuous feast of possibilities for both seasoned and budding lesbian performers to use portraying a full range of emotion and political perspectives. Carolyn Gage is a national lesbian treasure.” —Rosemary Keefe Curb, editor of Amazon All Stars: 13 Lesbian Plays.

“Her dozens of strong, funny, determined characters are a gift to lesbian actors everywhere... She also has a wicked sense of humor… ” --Bay Area Reporter, San Francisco.

“… remarkable strength and universality… moving and courageous… the collection will appeal to a readership beyond lesbian actors, because through careful research and deliberation Gage has created many stories of women’s lives. In her writing, she makes one face truths one might normally try to avoid.” --Lambda Book Report, Washington, DC.

“Gage’s imagination and her richness of dialogue are a wonderful offering to a theatre community that could certainly use a push in the direction of representing us all on the stage.” --On the Purple Circuit, Los Angeles.

“Strong contributions such as Gage’s should indeed help alleviate the long-standing situation of lesbians having to learn the craft of acting by impersonating heterosexuals… recommended for libraries supporting drama programs (schools as well as academic) and public libraries in towns and cities with community theatre.” --Newsletter of the Theatre Library Association, NYC.

“… a diversity of roles to stimulate the most adventurous lesbian performer… this text enables the reader to see the impressive range of her work as well as to supply a needed sourcebook for auditions and scene work in one volume.” --The Lesbian Review of Books, Hilo, HI.

"My copy of Carolyn Gage’s Monologues and Scenes for Lesbian Actors is dog-eared from frequent rereading and lending it to my sister-poets. In this book, Gage has given queer women theatre artists more than an array of sincere, intense, and electrically wit-loaded scenes and monologues. I’m thinking in particular of those from The Last Coming of Joan of Arc, The Last Reading of Charlotte Cushman, and Ugly Ducklings. Gage showcases a historical pantheon of lesbian movers, shakers, and culture-makers, announces a lesbian playwriting and performance tradition, and locates herself and her work in both. Gage shouts and sings a confirmation, invitation, and challenge to the rest of us.” —R.L. Nesvet, Playwright and Theatre Critic.

Finally! A book for lesbians who are tired of “passing” at auditions and in acting classes and workshops! Here at last, from one of the most talented and inventive contemporary playwrights, is a book of thirty-two monologues and sixty scenes by, for, and about lesbians. Here are dramatic portrayals of our coming‑out stories, our strategies of resistance, our rescue of survivors of sexual abuse, our passions, our torture, our triumphs. The settings are historic and contemporary, ranging from the goddess temples of Lesbos to the locker rooms of a softball team.

This collection includes scenes with characters taken from lesbian history: Jane Addams, Charlotte Cushman, Joan of Arc, Calamity Jane, Sappho, Babe Didrikson, Benedetta Carlini, Renée Vivien, Natalie Barney, and Eva LeGallienne. It also includes women from history whose sexual orientation may or may not have been documented, but whose survival strategies resonate with strategies of lesbians. These strategies include the separatism of Hildegard von Bingen, the confrontation of sexual violation in the art of Artemisia Gentileschi, the liberation struggle of Harriet Tubman, the repression and denial of Louisa May Alcott, the resistance of Mary Mallon (“Typhoid Mary”).

The book also includes material from plays protesting the sexual colonizing of women through the institutions of heterosexism: prostitution, surrogate motherhood, incest, rape, marriage, and the “slow-motion violence” of economic and political disenfranchisement. Two of the plays deal with the historic closeting of teachers in the school system, and one play specifically confronts the constrictive gender roles of the traditional canon. 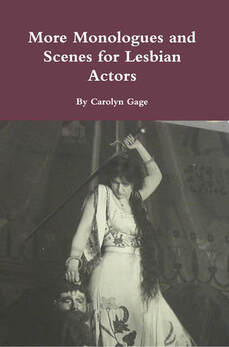