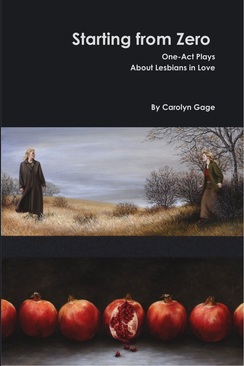 "There is nothing simplistic or mushy about Gage's lesbians in love. They are not headed down the aisle or the primrose path, or even toward 'lesbian bed death,' like the stereotypical couples in sitcoms... This book is a collection of nine widely varied dramas. They're full of the rich history of real-life lesbians who struggled to find love and self-worth... While Gage is a provocative playwright, she is also a ferocious historian, and it is thrilling to discover the lesbian history she unearthed and given voice to here."--Lesbian Connection

The Greatest Actress Who Ever Lived
A closeted reporter arrives in the dressing room of veteran, bisexual stage and film star Nance O'Neil, and as Nance shares the details of her affair with alleged ax murderess Lizzie Borden, the two women share a moment of intimacy.

Planchette
During a nor'easter on the New Hampshire coast, in 1879, two fourteen-year-olds share their secrets about trauma they have survived and the deeper secrets about their sexual orientations and gender identities.

Souvenirs from Eden
The ghost of lesbian poet Renée Vivien returns to a pivotal memory from the summer of 1900, when she was in Bar Harbor (“Eden”), Maine, with her lover Natalie Barney. She wrestles with scenarios of traumatic memories in an attempt to find closure.

Little Sister
A tribal police officer struggles with her lesbian partner over issues of loyalty and definitions of "family."

The Countess and the Lesbians
Three lesbian actors are rehearsing an historical play about Countess Markiewicz and the aftermath of her participation in the Easter Week Rising in Dublin. The play is about her political differences with her sister, who was a pacifist. As the women take up the issues of the play, the power dynamics of their own lesbian relationships are called into question.

‘Til The Fat Lady Sings
A play with music for two women in one-act. A fat woman in her 20’s is in the hospital awaiting surgery for a gastric bypass operation she believes necessary for her dream of singing opera professionally. Her partner is against the surgery, and as the patient goes under sedation, she finds herself and her partner in a series of bizarre dreams where her situation incorporates elements of operas by Wagner, Gluck, Verdi, Mozart, and Puccini.

Since I Died
A woman who has recently died attempts and fails to communicate with her lesbian life partner, who is unable to see her.