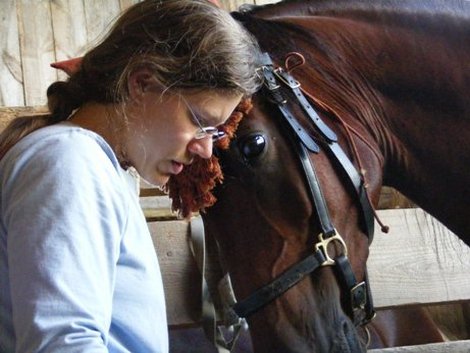 Caitlin Allen was one of my oldest friends from Maine. I met her in the spring of 1998, when I moved to Portland from Northern California. The culture shock was tough for a lesbian feminist artist… and I was very grateful to find a counter-cultural group of women practicing Wiccan spirituality on a weekly basis, the Feminist Spiritual Community. It was here that I met Caitlin, who had also recently moved to Maine. She and her partner had come up from Pittsburgh. (Footnote: The Feminist Spiritual Community is still meeting, after thirty-three years!)

Caitlin was a wonderful friend to me, and also to my cat Binda. She would care for Binda when I was away on tour. Caitlin was a great lover of animals. I remember an African gray parrot she had named Mawu. And her dogs Jupiter and Star. And then, of course there were the horses. She loved living with and working with horses, and she was a professional farrier. Her neighbors up in Starks told me that she could trim hooves on horses that men twice her size were afraid to work on.

Caitlin was the most generous person I ever met, and she loved sharing with others. She joined her local Big Sister program, and would take her “little sister” Rose on camping trips, teaching her skills in farming and riding. Caitlin never came to my house without some kind of gift… usually something that she had made herself. And she was incredibly diverse with her crafts. She made lamps with wood from around her farm, and she also modeled with clay. When she got into a tiff with a neighbor about her dogs barking, she made a beautiful wooden, painted sign that read “Barking Dog Farm.” She used to have a home internet business, where she would make portraits from people’s photographs of their animals. Her animal paintings were deeply expressive and soulful. She also wrote a charming children’s book about a girl who wanted to become an auctioneer.

Together Caitlin and her partner Jen Gilmore remodeled their first home in the country and then traded up to a full-fledged, thirty-acre farm, complete with a barn. This was a real fixer-up… I remember they spent weeks just removing the possum poop from the farmhouse. The back half of this farmhouse was sliding down a hill, and you could see daylight where it was slowly separating from the front of the house. Together Caitlin and Jen did an astounding amount of labor fixing up their farm. The barn was completely remodeled into a beautiful, green cabinetry shop for Jen. Today, as someone noted at the memorial service, it’s a showpiece for the town.

At various times, Caitlin and Jen would have ducks, chickens, goats, horses… and always an assortment of cats and dogs. Caitlin was endlessly curious about farming techniques, and especially low-tech ones. I was there the day that she took her brand-new scythe for a test drive on the grass around the house. She and Jen grew the bulk of their own food, canning and drying for the winter. She filled her freezer with chickens that she had killed and plucked herself.

Caitlin and Jen hosted me for many Thanksgivings, and their home exuded a combined ambiance of lesbian feminism and “All Creatures Great and Small.”

There are two stories I would like to share with Maize about the years of my friendship with Caitlin. One is a sad story and the other a silly one.

The sad story took place on March 27, 2004. This was the five-year anniversary of the deaths of two teenaged lesbians from an area of rural Maine. They had killed themselves together, running their car into a tree at over a hundred miles an hour. This was just a month after there had been a very ugly voter referendum, where citizens of Maine voted down legal protections for LGBT citizens. The hateful rhetoric in the newspapers and the churches had been overwhelming, and especially in the rural areas. These suicides came fifteen years before the anti-bullying campaigns, and the motive for their deaths had been closeted by the press. The contents of their suicide note, addressed “to everyone important,” had been suppressed.

I wanted to do an action on this anniversary, and especially around the suppression of their last words to the homophobic world that had killed them. I invited my friends and fellow-writers around the world to imagine what the contents of that note might have been, and then to send me their versions. It was my plan to nail these suicide notes up all over the tree where they had died, with an explanation of “The Note Project.”

I asked Caitlin if she would be willing to go with me, and, of course, she was. I remember she brought the tack hammer. It was a rainy night, and I met her at a truck stop off the freeway. We drove together to the site, a bend in the road so notorious that it was called “Dead Man’s Curve” by the locals. We were terrified.

We could see that we would be caught in the headlights of any car that went by, and we were sure that every car would know exactly what had happened there and would suspect that we were desecrating the memory of these girls. And, in their homophobic world of values, that is exactly what we were out to do. We felt that we could easily be shot. But it was more than that. Really, we probably weren’t in that much physical danger, but that night we were crossing over into the territory of telling the family secrets and naming the perpetrators: a school system that enabled bullying, a church that damned lesbians to eternal hellfire, a state that felt it was legitimate to fire and evict us… and possibly parents who didn’t or couldn’t understand. Every internalized injunction from our own traumatic childhoods was triggered by our action that night, and we were scared out of our minds. I remember it was raining, and everything was slick and shiny. We leaped out of the truck and began nailing up the notes like maniacs. It felt like it took a half-hour. It probably took five minutes. And then we ran back to the car, soaked and shaky, and drove like a bat out of hell to a gas station far enough from the scene where we felt we were safe. And then we sat there, looking at the photos Caitlin had taken… with raindrops like tears on the lens, and waiting for our hearts to stop beating out of our chests.

Caitlin was a passionate lesbian, and a political one. She never missed a thing about her own oppression or that of others. And she was always up for the fight. Her support for my work was tremendous… making props, taking on roles in readings, doing artwork, ushering. She was always right there, ready to help.

The second story I want to tell is about a photo shoot up at her farm. I was directing an evening of my work in Portland called Wild Women Don’t Get the Blues, and I had the idea of a poster where women would be on horseback, throwing off their civilized clothing, as they rode horses into the wild. I lined up a group of friends who said they would do it, but when the morning of the photo shoot arrived, they all apparently came to their senses and bailed on me. I went up to Starks alone. I would be the sole bare-ass, naked wild woman outriding her blues. What I remember most about this day was how hilarious it was…  First the whole getting naked on a horse thing (I’m still showering three times a day… kidding) and then the tossing off of the clothing as Caitlin tripped along the meadow behind trying to capture a clear image, and most of all, trying to get the horse to cooperate. The horse was a farm animal, and he seemed to understand that this project had nothing to do with any kind of real work like hauling or ploughing, and that it was beneath his species and his dignity to be any part of it. In short, he was disgusted. Caitlin would lead him back to the starting point and have him do this “walk of shame” over and over again, as she took the photos. Each time, he would make clear his intention to return to the barn, and each time, Caitlin would make clear her intention to get him to redo the take. The image that she finally got, complete with the horse’s annoyed tail-swish, was priceless. I ended up making posters and greeting cards from it.

This is not the place I choose to talk about her death or the years that immediately preceded it. What I want to write about here was the woman with a dream, with endless creativity, bottomless generosity and loyalty to her friends, a passion for horses and an affinity for all animals—an incredibly positive, ambitious, progressive, inspiring, independent, community-minded lesbian and feminist artist, role model for girls, farrier, farmer, and craftswoman. She lived with tremendous courage and vision, and it was a privilege to experience her as my friend and my sister-warrior. I will feel the power of her example for the rest of my life.