Interview with Rain and Thunder 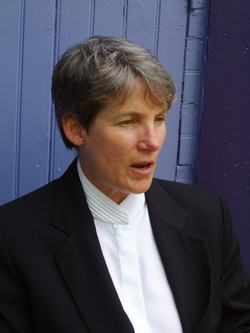 Interview with Nayiree Roubinian, originally published in Rain and Thunder: A Radical Feminist Journal of Discussion and Activism,  October 2013

NR: When and how did you enter into the world of Lesbian playwriting?

CG: It was in 1985 or 1986… It was the year that I divorced, came out, began to recover memories from my childhood… and I was also involved in a huge whistle-blowing lawsuit against the University of Oregon where I had been a student in a doctoral program. Red- letter year for me… with overwhelming overlap between the politics of my aborted academic career, the Complex PTSD symptoms from child sexual abuse, my exit from a heterosexual marriage and lifestyle, my coming out, my having to quit my homophobic church, and my aspirations as a playwright. Every single institution that had supported my identity was taken out from under me, and I found myself in freefall. Fortunately, I had the writers like Mary Daly and Julia Penelope and Audre Lorde and Matilda Joslyn Gage (yes, I took her name) to catch me. They quite literally saved my sanity and my life. This is one of the reasons why I write the plays that I do… As African American author Toni Cade Bambara wrote, “The issue is salvation.”

NR: What is your favorite part about being a playwright?

CG: The excitement of engaging with a difficult idea, wrangling with it… and shifting the paradigm.  In all of my plays, there is a patriarchal choice of A or B, and I wrestle until I break through to that “C”… none of the above. There are no words for that feeling. It’s like breaking through a wall in your mind, and seeing this huge, beautiful space open up. Liberation. That’s the word.

NR: What does the creative process look like for you? From where do you get your inspiration?

CG: Much of my inspiration comes from the lives of real women, often lesbians whose sexual orientation has been historically closeted. My process begins with a lot of research, and then I begin to sketch out the characters and the scenario. I use a very old-fashioned playwriting structure… yes, the “well-made play” that has been such an object of contempt in academia for the last several decades. That’s what I write. Well-made plays. It’s enough that the content is radical. In fact, I find that, for me, experimental and non-linear structures are not as challenging and don’t pack the same punch. Those plays can shock and disorient, but what I’m after is radical transformation of thought, not just commotion. I find that the structure of the “well-made play” is not so much a constriction, as a focusing device. Combine that structure with an agenda for social change and the intention can become as concentrated as a laser.

NR: Which of your play characters have you most identified with and why?

CG: I identify with all of them in different ways. I think of my comedy Sappho in Love. This is a play about all the different, crazy ways lesbians do relationships. And I feel that I’ve been every single one of the characters: the celibate warrior, the lust-crazed love junkie, the joined-at-the-hip codependent. The Joan of Arc character is often associated with me, because I toured in the role for twenty-two years… but she represents a small slice of my life… the period between coming to consciousness as a feminist and starting recovery. Great intellectual analysis and insights, but total disconnect when it comes to her behaviors. A tough period to recreate and inhabit!

NR: Why do you think theater is important for Lesbians and Lesbian community?

CG: Because story is everything. Story is so huge, we can’t see it. It’s like the air we breath. It’s the template with which we make sense of our lives, this world, our experience. As lesbians, we are marginalized, demonized, etc. in the dominant narrative. It is critical for us to tell the stories that put us at the center of our own experience, and theatre does this so powerfully, because it is enacted in real time with real bodies. For those few hours, the audience is actually in that alternative universe, not just reading about it or thinking about it. They are in it. That’s huge.

NR: How do you use playwriting as a political tool for women and Lesbians?

CG: I think I have answered that in the previous question. I believe that people, like most plants, will grow toward the light. We will grow toward the highest vision. This is why patriarchy marshals so much of its force to restrict and colonize imagination. Women, and especially lesbians, are fed such nutrient-deficient images and stories, it’s difficult for us to thrive. You know, Monique Wittig referred to the 1970’s as the Golden Age for lesbians. I think we should take that very seriously, the way Western heteropatriarchal culture celebrates the Greek Classical Period or the so-called Enlightenment. Much of the most brilliant writing from that era is out-of-print. We need to appreciate that it was a great flowering of classic works that should never be out-of-print, and that should be foundational to the cultural education of every lesbian.

NR: What changes have you seen as a Lesbian playwright from when you first started?

CG: Many more women are writing, directing, being produced. But, honestly, I don’t see much that speaks to me. I have a blog about the first lesbian play to make it to the Royal National Theatre in London… Her Naked Skin. The title says it all. West End.  I still think the most radical feminist play in Broadway history was Sholom Asch’s God of Vengeance. Nearly a century ago.

NR: What do you feel are some of the key obstacles that Lesbian writers and playwrights continue to face today and what do we need to do in response?

CG: Lack of theatres. Lack of theatres. Lack of theatres. We need to address that. When we settle for a slot in the season of an LGBT theatre, we will rarely see authentic representation of lesbians. We will most often see plays with lesbian characters in plots that are not lesbian-specific, and seldom feminist. We will see misogynist playwrights like David Mamet writing lesbian plays that get mainstream productions. We need to have our own theatres, even if they are  readers’ theatres in our living rooms. And I have written two books to help jumpstart this cultural revolution: Monologues and Scenes for Lesbian Actors and Take Stage! How to Direct and Produce a Lesbian Play.  I wrote both of these years ago, and they are both still timely, because live theatre is essentially the same as it was two thousand years ago. It has not been significantly affected by the technological changes that render the production of some art forms, like film, outdated every five years.

NR: In the current climate of backlash, what do you think is needed to jumpstart our radical feminist and Lesbian feminist movements?

CG: Political movements happen when a population either can’t take the oppression anymore, or when they achieve a collective level of empowerment and entitlement that enables them to conceive of affecting political change. I certainly feel that recent rollbacks of women’s rights are creating the first condition. The second condition might be tougher, because women, and especially lesbians, have been seduced by the promise of assimilation.

NR: What do you feel most proud of about your work over the last 30 years? Which of your plays really stand out for you?

CG: That I am still here, still growing, still writing. I am proud of all of my plays. The ones that stand out to me are the full-length plays, which, alas, are so rarely produced because they have large casts. It is possible to tell a powerful story with two or four characters, but there is a reason Shakespeare, Moliere, Ibsen, Aeschylus wrote with large casts. They would be out-of-work today… unless they could come up with a four-hander that takes place in one room of the palace. A big issue requires multiple subject positions, subplots, spectacle, and so on. The economics of today’s theatres are slowly removing every theatrical element from the stage.

NR: What are some of the plays and/or projects that you are currently working on?

CG: I have just completed a DVD of twenty-one podcasts from the Lesbian Tent Revival Radio Hour by “Sister Carolyn” of the Sisterhood of the Sacred Synapse. These are a hoot, and also chock-full of invitations to radical thought.  I am working on two short plays, but it’s too early to talk about them. And I am working on marketing a musical about lesbian athlete Babe Didrikson. It has a gorgeous score, has been through three workshops, and it’s all dressed up and ready to go. I invite readers to take a listen...

NR: How can readers support your work?

CG: Buy and read my plays. They’re all available now on Kindle, on Nook, as PDF’s, and as paperbacks. Invite friends over, have a reading and discussion. Invite me in. I’d love to be a part of the evening! Start a theatre. Bring me to your community to lecture, perform, give a Lesbian Tent Revival. If you have any theatre connections at all, send them my work, send them to my website! If you work at a university or you are a student, give my work to your professors, send them to the “Touring Work” on my website. Sisters, we have to be evangelical about what matters to us, and seeing our stories come alive on the stage needs to matter.